TOMODACHI “The Power of Music” Program 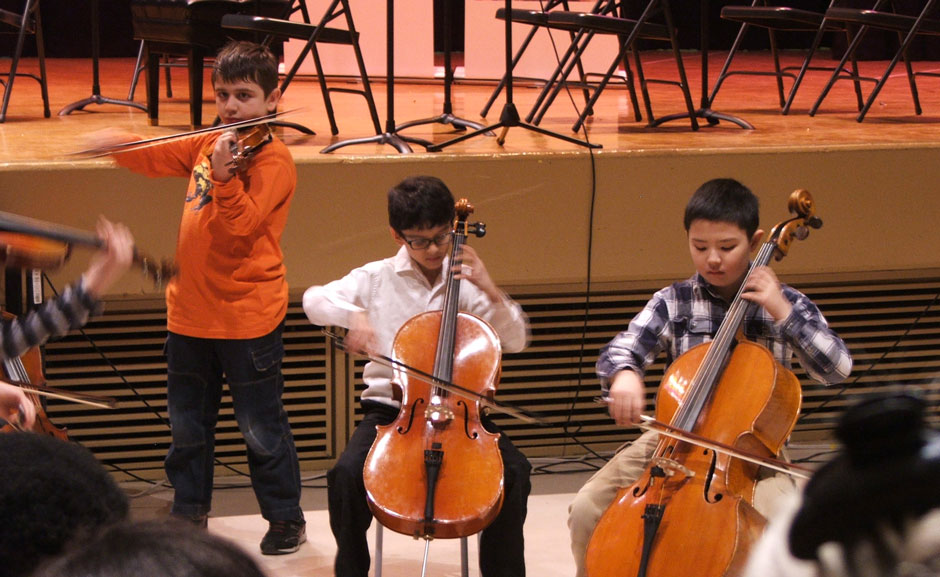 Six members of the Tokyo Philharmonic Orchestra visited the Special Music School in New York City on March 10, 2014 for TOMODACHI “The Power of Music” young musicians engagement program. The orchestra was in the city for a performance scheduled for March 11 at Lincoln Center’s Alice Tully Hall to kick-off its three-continent, World Tour celebrating its 100th year anniversary. The program included selected performances by the students of the Special Music School, New York City’s only public school for musically gifted children, a presentation by the conductor of the Tokyo Philharmonic Eiji Oue about differences and similarities between Western and Japanese music followed by flute and percussion demonstrations by Tokyo Phil members illustrating melody, rhythm and sound differences. The program culminated with a collaborative performance of the song “Hana wa Saku” by 6 Tokyo Phil members, special music school orchestra students and 5 music students from Fukushima University (4 violinists, 1 cellist). 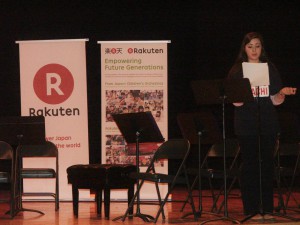 Young Americans’ performer Erica Ishiyama served as the MC of the program. She began the program by talking about the events of March 11th, the beginning of the TOMODACHI Initiative and how the day’s program came together with the support of Rakuten and the Tokyo Philharmonic. The audience included students from the Special Music School and parents.

The students from the Special Music School performed in three groups. The students performed so well and all played without sheet music.

Following the student performances, Maestro Eiji Oue was invited to give his thoughts on the work and then speak about differences between Japanese and Western music. Mr. Oue spoke about the power of music to connect people and help them to overcome hard moments and experiences. He was so animated in his demonstrations of ‘secondary anthems’ on the piano. He played songs for both the American and Japanese audiences that they each were able to join in and sing.

After the maestro, two members of the Tokyo Philharmonic Orchestra — Principal Flutist Mr. Saito and Principal Percussionist Mr. Shiota — gave instrument demonstrations. Saito-san, demonstrated how he could play a regular flute in a way that sounded like the Japanese bamboo style flute. Then he placed a special apparatus on the flute that allowed him to transform it into an instrument that could slide so he could play jazz style. Mr. Shiota demonstrated some typical Japanese rhythms on the drums and other percussion instruments. Then he and Mr. Saito played a short piece together.

The final part of the program was a joint performance of the Tokyo Philharmonic members, music school students, and Fukushima students playing Hana wa Saku, the song that became an anthem for the nation following the Great East Japan Earthquake and Tsunami. The students were paired with a Fukushima and Tokyo Phil person in their section. During the rehearsal, the professionals were helping the music school students with their fingering and bow work. The group played the song twice, the first time through was just the music with the maestro conducting and the second time he invited all the students in the audience to come forward and sing along.

The director of the music at the Special Music School was extremely grateful for the, “…unique opportunity to introduce such high caliber international performers to the students. This is definitely a special opportunity for the new high school students at the school.” In response to the question “What did you learn from this exchange experience,” one of the American students stated, “I learned a lot…that Japanese music is different from anything I’ve heard.” She went on to say that, “It is really important to me [to meet people from different places and play with them] because the whole point in life is to meet new people and make friends.” Even in such a short period of time, these students connected with the Japanese through the power of music!

The first two pieces were by Japanese composers – Toshiro Mayuzumi’s BUGAKU Ballet in Two Parts and Kiyoshige Koyama’s KOBIKI-UTA for Orchestra. Both pieces had such distinct rhythms throughout that incorporated both the strings and percussion in harmonious ways. Igor Stravinsky’s The Rite of Spring was the third piece and was so distinctly different from the first two. The woodwinds led this piece, and the whole orchestra vibrated with the energy of the music. Maestro Eiji Oue was so connected to the music that he often conducted without his baton and for the last piece, he did not use any sheet music. The orchestra did an encore with an arrangement that was a collection of Hollywood songs. The starting song was There’s no Business, Like Show Business, and other classics scores from old time movies followed including Easter Parade and White Christmas. It was an exciting and energetic way to end the program. 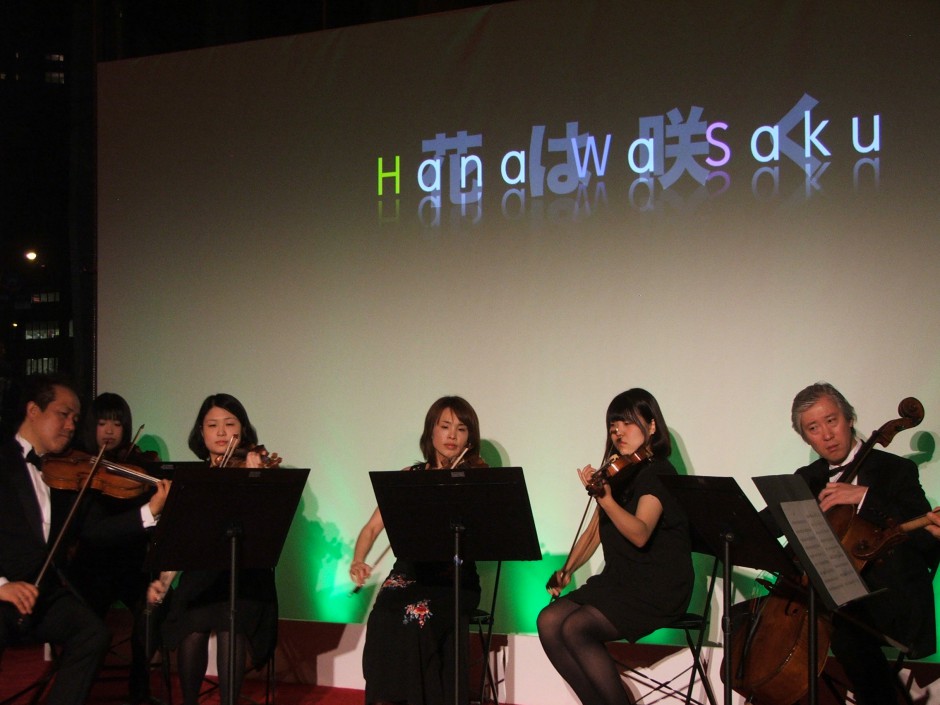 The reception for 300 guests sponsored by Rakuten followed the performance in the lobby of Alice Tully Hall. Rakuten Chairman Hiroshi Mikitani welcomed everyone to the reception and the first performance of the Tokyo Philharmonic’s World Tour. His remarks were followed by Dr. Barbara Ruch, a professor emerita of Japanese Medieval Studies at Columbia University. She has worked to support the renaissance of early Japanese music both in Japan and on the world stage. She expressed how moved she was to hear the two Japanese pieces performed in person and exclaimed that the rest of the world was hungry to hear these works performed. The final speaker was Mr. Kusaka from the Counsel General of NY who offered a toast to commence the reception. 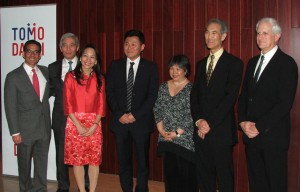 U.S.-Japan Council Board Members were in attendance and conversed with the TOMODACHI Uniqlo Fellows Natsuko Koike and Ryohei Kawanishi who are currently studying at Parsons New School of Design and the Fashion Institute of Technology. This was a point of commonality when they were introduced to Dr. Edwin Schlossberg, the husband of Ambassador to Japan Caroline Kennedy, who stated that he had previously taught at both universities. During the reception, the five music students from Fukushima joined a few of the Tokyo Philharmonic orchestra members to perform Hana wa Saku. Mr. Mikitani was then serenaded by the group with a resounding chorus of Happy Birthday, as the 11th was his birthday.