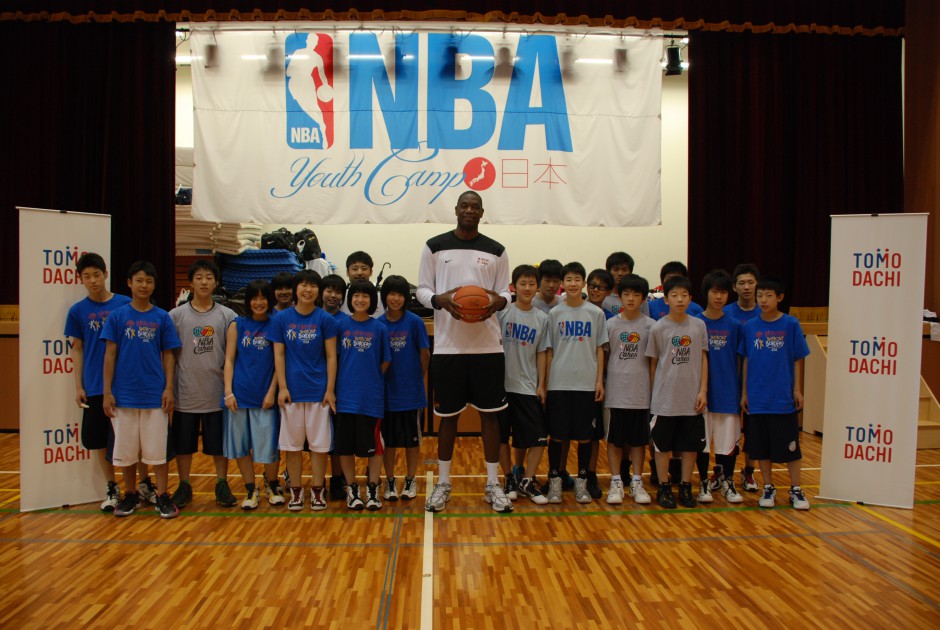 June 24, 2012 – The TOMODACHI Initiative partnered with the National Basketball Association (NBA) and the Japanese non-profit organization Frontier Minamisoma to sponsor the participation of 20 middle school students from Fukushima prefecture at the NBA Youth Camp in Tokyo on June 15-17, 2012.

The children – 14 boys and 6 girls – were from Minamisoma, a city directly impacted by the earthquake, tsunami, and nuclear crisis following the Great East Japan Earthquake of March 11, 2011. Parts of the city, which is about 16 miles from the Fukushima Dai-ichi Nuclear Power Plant, are still off-limits due to radiation contamination.

The students worked with coaches as well as current and former NBA players to hone fundamental basketball skills such as shooting, passing, setting picks, and post moves.  They also made friends with other camp participants, including American children living in Japan and other Japanese students.

Legendary center Dikembe Mutombo and former Japanese NBA player Yuta Tabuse made a guest appearance together, teaming up for a basketball demonstration that illustrated the importance of communication and teamwork.  They shared stories about the toughest moments in their basketball careers, stressing to the children that through hard work and perseverance they can succeed at basketball, their schoolwork, and whatever they choose to do in their lives.  They also underscored how people of different backgrounds and heights can succeed in basketball if they put their minds to it (Mutombo is 2.18 meters or 7 feet, 2 inches tall; Tabuse is 1.75 meters or 5 feet, 9 inches tall).

Additionally, Vladimir Radmanovic of the Atlanta Hawks taught the students that although NBA players are not always perfect shooters, with hard work and a strong knowledge of the basics, everyone can become a great player.   He showed camp participants how to improve their jump shooting and ran a three-point contest where he competed against the best shooter among the camp participants.

Coaches Kiyofumi Tanaka and Yuji Hatano, who accompanied the children from Minamisoma, hoped that all of their students appreciated the fundamental lessons that were taught by the NBA players and camp counselors.

“Even NBA players, the best in the world, still practice the basics over and over,” said Mr. Tanaka. “I hope that this will inspire the students to see that doing the small things really do matter and that they can bring this positive attitude back to Minamisoma to apply to their daily basketball practice and their schoolwork.”

Mr. Tanaka was also very happy to see his students practicing their English with the coaches and American children attending the camp.

“They study English but don’t really have the opportunity to practice it back home. Seeing both the Americans and other Japanese kids speaking English can help our students’ confidence grow so they can freely start practicing English in everyday life.”

The NBA Youth Camp was one of several activities held by the NBA in Japan during the week of June 12-17 under the Basketball Without Borders program.   On June 12, the NBA, TOMODACHI, and United Sports Federation hosted a basketball clinic for middle school students near Sendai, featuring Mutombo, Radmanovic, Tabuse, Denver Nuggets player Corey Brewer, and several NBA coaches. The NBA also organized a program for selected top high school players from across Asia that was held at the American School in Japan.

Jun 24, 2012
ABOUT US
PROGRAMS & ACTIVITIES
NEWS & MEDIA
GET INVOLVED
CONTACT US