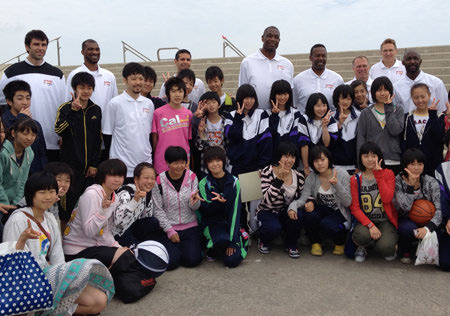 The event was part of the Basketball without Borders Asia program for boys and girls from areas heavily affected by the tragic, multi-dimensional disasters that struck Japan on March 11, 2011. First held in 2001, Basketball without Borders is the NBA and FIBA’s global basketball development program that uses the sport to create positive social change in the areas of education and health and wellness.

Basketball without Borders Asia, which was held in Japan for the first time, took take place June 13 – 16 in Tokyo.  BWB features top youth players from each region, as selected by the NBA and FIBA, training under NBA players and coaches.  Campers received top-level instruction on-court and participated in daily life-skills seminars focused on values of the game such as leadership, character development, and living a healthy lifestyle.

Through NBA Cares, the NBA players and coaches also participated in extensive community outreach efforts highlighted by the creation of places for children and families to live, learn or play including new technology centers, libraries and basketball courts. With generous support from the NBA, TOMODACHI also sponsored a rare opportunity for Tohoku boys and girls to attend a two and a half day NBA Youth Camp in Tokyo from June 15 – 17.  Kids from the town of Minamisoma, which has faced challenges brought about by the earthquake, tsunami, and nuclear situation, attended the camp in Tokyo.

Jun 13, 2012
ABOUT US
PROGRAMS & ACTIVITIES
NEWS & MEDIA
GET INVOLVED
CONTACT US