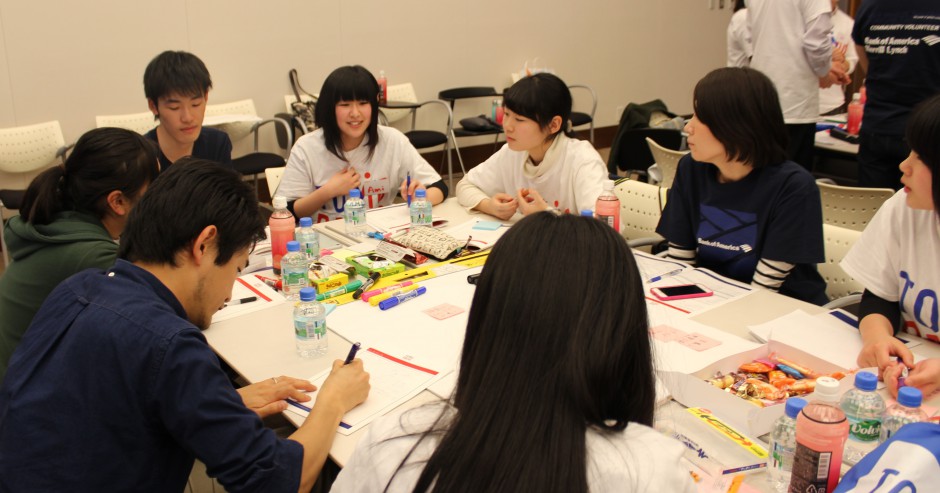 “I was able to have confidence in my leadership style thanks to my team members,” said Kazuki Kokubun, participant of the TOMODACHI Generation Global Leadership Academy 2016. The Academy enabled the TOMODACHI alumni who are from Tohoku to experience and witness the power of teamwork and learning from one another.

Nearly 60 alumni representing 12 TOMODACHI programs participated in the TOMODACHI Generation Global Leadership Academy, which began on March 4th 2016 in Tokyo. The Academy aimed to provide an opportunity for students to not only look back on the past five years since the Great East Japan Earthquake, but to also think about how they can stay connected and committed to their communities for the next five years, to 2020. The Academy focused on the overall theme of social innovation and three topics; education, entrepreneurship, and technology. The three-day academy was comprised of multiple workshops, speaker sessions, career night and lunch reception that included final presentations by each student group. This program is supported with generous funding from Bank of America Merrill Lynch.
On March 3, 2016, prior to the start of the program, student leaders and mentors met for the first time at the Bank of America Merrill Lynch offices in Tokyo to discuss their leadership styles and how they hoped to execute these over the next three days and took part in an ice-breaking activity facilitated by the Chikaken Takeakari Project.

The following morning, high school students arrived from Tohoku. Students from the Iwate, Miyagi, and Fukushima prefectures were split up into nine groups according to their region. Brainstorming for an action plan was soon underway, with the day’s discussion focusing on the various events and projects that had sprung up in the participants’ communities in the wake of the Great East Japan Earthquake. In the evening, the high school participants were given the chance to hear about their mentors’ various career paths as they dined at the Bank of America Merrill Lynch Café. 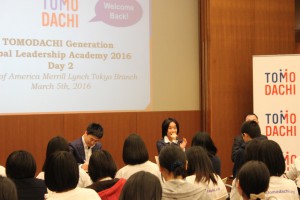 Another busy day of speaker sessions and workshops at the Bank of America Merrill Lynch awaited the students on March 5, featuring a range of guests that included keynote speaker Tomoyuki Banno from ETIC. (Entrepreneurial Training for Innovative Communities), who talked about how social innovation has evolved in Japan after 3.11, followed by experts from the focus fields of education, entrepreneurship, and technology: Shunichi Kanamori from Katariba, Megumi Ishimoto from Women’s Eye, and Takuo Hada from Asratec Corp.  After the speaker sessions, participants regrouped into their teams and began to create their own actions plans on how to improve their communities in Tohoku. Kazuki Kokubun from Koriyama and Nami Yanagawa from Ichinoseki reflected on their experiences as student leaders below:

“In order to become the ‘leader’ I envision, I had to comprehensively and perfectly understand the core and the essence of the team’s action plan in order to lead them towards the right direction at the right time. Listening to the discussion, it was interesting for me to realize just how challenging this task was. Although it was my first time playing the role of the leader, things went more or less how I hoped they would.” – Kazuki Kokubun (Koriyama, Fukushima Prefecture)

“Opinions collided well into the night as everyone was wrapped up in trying to make a really good presentation. It was an experience where I acutely came to understand the difficulty of maintaining mutual understanding whilst producing a single proposition. I was given the chance to learn the importance of seeing others through an equal lens. [My mentor] was especially good at treating high school students as equals, so everyone could speak freely and communicate easily. This inspired me to want to become the kind of adult who addresses everyone as equals.”  -Nami Yanagawa (Ichinoseki, Miyagi Prefecture)

During the evening, students attended the ‘Japanese American Career Night’ where they met U.S.-Japan Council President Irene Hirano Inouye, who spoke about her experiences as a Japanese American and what led her to become the leader she is today, particularly in the Japanese American community. The evening was led by TOMODACHI Emerging Leaders Program (ELP) alumni Evelyn Tokuyama and Steve Sakanashi, and brought together Japanese American young professionals who each shared their own unique experiences with the program participants. 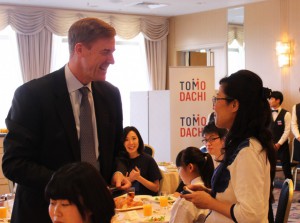 The third and final day of the program was a lunch reception held at Haneda Airport’s Galaxy Hall. This was a big day for the students, for whom the three days of intense debate and discussion had been leading up to a presentation in front of many guests who are continuing supporters of the TOMODACHI Initiative. After hearing remarks from Irene Hirano Inouye, Mrs. Marrie Y. Schaefer (Press Attaché, U.S. Embassy Tokyo), and Mr. Timothy Latimore (Japan Country Executive and President, Bank of America Merrill Lynch), and a video message from Mrs. Akie Abe (wife of the Prime Minister of Japan), the nine teams presented their action plans. 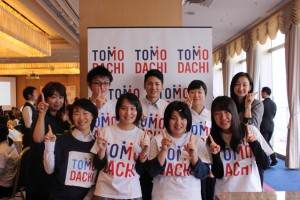 The winning action plan came from Team 1, entitled ‘Discover hidden beauty in Japan!’ – a project designed to combat the lack of hometown attachment and the resulting problem of population outflow from rural areas. The idea was to help people form an attachment to their rural hometowns by inviting guest speakers and holding lectures and discussions, as well as getting them involved in competitions. The winning team was also given the opportunity to submit their proposal to Counselor Shinya Fujita, a representative from the Japanese National Reconstruction Agency. Mr. Fujita praised the alumni in saying: “Recovery from the Great East Japan Earthquake has been defined as a decade-long project, and five years on from the disaster, we now stand at its halfway point. Your presentations today have given us lots of inspiration.” 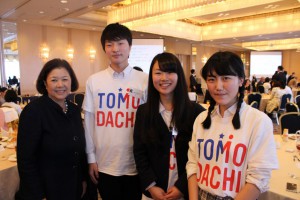 One of the student leaders Koto Endo reflected on the overall experience through the Academy and commented; “participating in this program made me realize just how many people have been supporting me behind the scenes. Moreover, the high school students that I met over the three days became my mentors. Each TOMODACHI program reinforces the fact that something negative can be seen as a good thing if you only look at it in a different way. The program was an irreplaceable platform where I reconsidered what I knew and looked back on the past with a renewed energy and passion.”

Mar 23, 2016
ABOUT US
PROGRAMS & ACTIVITIES
NEWS & MEDIA
GET INVOLVED
CONTACT US