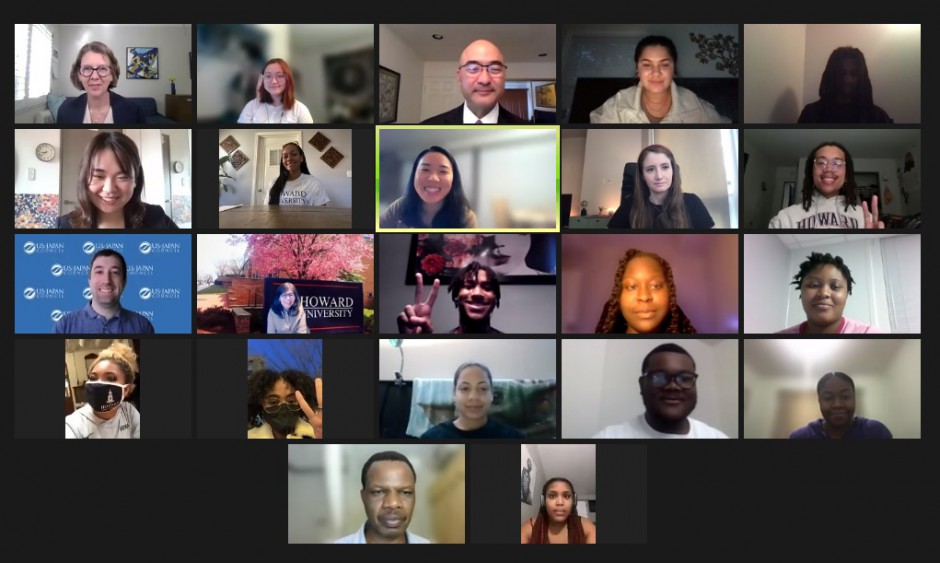 On March 8th 2022, a virtual event for TOMODACHI KAKEHASHI Inouye Scholars Program 2022 participants from Howard University was held. This program is a youth exchange that provides American and Japanese university students an opportunity to learn about one another’s countries and cultures. Initiated in 2014, the goals of the program are to honor the life and legacy of Senator Daniel K. Inouye and offer the participants an opportunity to learn about his contribution to his country, heritage, and the U.S.-Japan relationship.

For this event, participants from Howard University gathered for a special opportunity to engage with Ken Inouye, USJC Board of Councilors member and son of Senator Daniel K. Inouye and alumnae of the 2017-18 program, Samsara Counts and Honoka Nishio. The event kicked off with special remarks from Mr. Kohei Akiyama, Acting Director at the North America Exchange Division at the Ministry of Foreign Affairs of Japan, and Dr. Leonard Muaka, World Languages & Cultures Department Chair at Howard University. Both Mr. Akiyama and Dr. Muaka emphasized the importance of multifaceted people to people exchanges across different cultures, and the importance of cultural and language exposure in shaping future leaders.

In a dialogue led by USJC President and CEO, Suzanne Basalla, Mr. Inouye shared stories of his father, including the Senator’s motivation for pursuing politics, and the highlights of his career, traveling from Hawaii to the Capitol. Upon hearing the Senator’s story, program participant Terry Jones Jr. asked Mr. Inouye how he and his program participants could help continue the Senator’s legacy. In his response, Mr. Inouye shared a message that his father believed deeply in – civic engagement. “[My father] saw civic engagement as of vital importance… No matter what you do in this world, you need to participate and be an active participant.”

The participants also heard from alumnae, Samsara Counts and Honoka Nishio, who participated in the 2017-18 iteration of the program as students from George Washington University and Sophia University, respectively. In recounting their experiences, Samsara and Honoka shared the lasting impact that the TOMODACHI Program has made on them, leading to their continued involvement in TOMODACHI alumni activities as well as other opportunities presented by the USJC.

May 22, 2022
ABOUT US
PROGRAMS & ACTIVITIES
NEWS & MEDIA
GET INVOLVED
CONTACT US