On October 24, 2017, Regional Leaders from the Kyushu Region organized a ryugaku (study abroad) informational event focused on sharing their experiences from the TOMODACHI programs, furthering interest in study abroad, and to promote the importance of gaining an international mindset. The event was kindly hosted by the Fukuoka American Center in Fukuoka City, and held as part of a TOMODACHI Alumni Regional Framework theme event.

A total of 26 people (half of whom were the TOMODACHI alumni) signed up for the event. Participants consisted of university students and young professionals, and seven different TOMODACHI programs were highlighted as alumni spoke about their experiences and the impact the individual programs have had on their lives. The event opened with remarks from the Regional Co-Lead Nazuna Yamazaki, alumna of the TOMODACHI MetLife Women’s Leadership Program, followed by an explanation of the Fukuoka American Center by Maiko Cagno of the U.S. Consulate in Fukuoka. Following that, seven alumni speakers spoke about their respective TOMODACHI programs, including Tamaki Yoshikawa, who spoke about her experience on an alumni-specific program, the TOMODACHI Alumni Disaster Resilience Training Program. Kaito Manabe, Kyushu Region Co-Lead with Nazuna, spoke about the Alumni Regional Framework the he is a part of and called out to alumni to challenge themselves to be leaders in the region and represent Kyushu. Remarks were also made by Kaoru Utada, Alumni Manger of the TOMODACHI Initiative, and ended with closing remarks by Shotaro Kurata, Regional Mentor for the Kyushu Region. 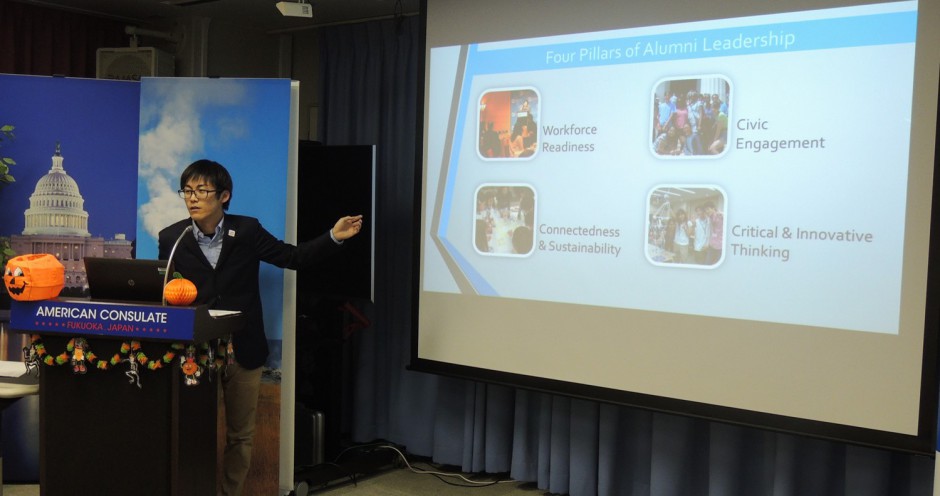 Nov 29, 2017
ABOUT US
PROGRAMS & ACTIVITIES
NEWS & MEDIA
GET INVOLVED
CONTACT US