A Successful Conclusion to the Building the TOMODACHI Generation Program 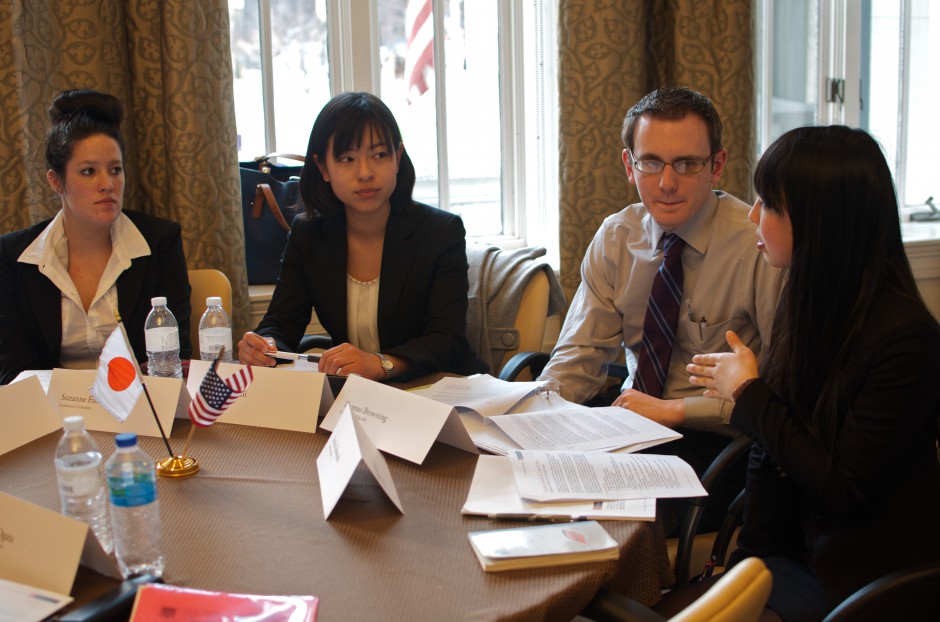 February 28, 2014 marked the conclusion of The Building the TOMODACHI Generation program in Washington, DC.  This program implemented by The Washington Center and the U.S.-Japan Research Institute brought together 16 undergraduate and graduate Japanese and 12 American university students for a two-week leadership program focusing on development strategies for cross-sector partnerships to strengthen civil society as a tool for addressing social challenges, particularly following a crisis or natural disaster like the one that struck the Tohoku region in 2011.The curriculum included the strengthening of key global skills such as cross-cultural understanding, leadership, public speaking, social responsibility, innovation, problem-solving, critical thinking, communication and networking skills through participation in guided team building exercises, discussions, workshops, a capstone project and other program activities. 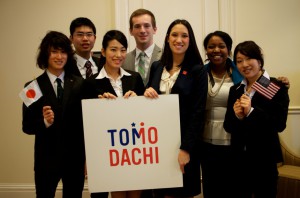 All the Japanese participants safely arrived by February 16 despite delays related to a large snowstorm that blanketed Tokyo. The program opened on February 17 with leaders of the three partnering organizations -– The Washington Center (Michael Smith), U.S.-Japan Research Institute (Yoshiaki Abe), and the U.S.-Japan Council (Irene Hirano Inouye) –- welcoming all the participants to the program and the United States. Speakers and organization staff had the opportunity to talk with participants in small groups to learn about their background, interests in the United States, and what they were looking forward to with the program.

The American participants had little knowledge of Japan or Japanese culture prior to applying for the program, but were eager to learn and work with peers from another country.  Upon first meeting they all seemed to get along well and really enjoy each other’s company. These connections were made deeper by their shared experience during the two weeks they spent together.

This program included presentations by panels of experts from across government, business, and nonprofit sectors who discuss the various ways they have employed cross-sector partnerships to address social and community issues. These panels included U.S.-Japan Council staff and members.  Students visited organizations, companies and government offices to see first-hand the structure and environments in which this work is done. Students also participated in professional development workshops where they learned about business practices in the American context. The entire group took part in a weekend-long team-building workshop at an outdoor leadership training ground in Maryland ahead of the development of their group projects and presentation preparations. As the program came to a close, the students came together to think about what it means to be members of the TOMODACHI generation and how they would enact that identity upon returning to Japan. Working together they developed a TOMODACHI pledge that states:

“As members of the TOMODACHI generation, we pledge to strengthen our bonds and create cross-sector partnerships through leadership to construct a resilient civil society.” 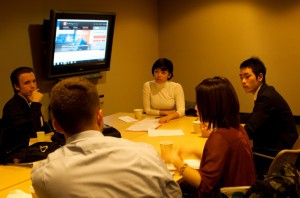 To strengthen their cross-cultural networking skills, a network reception hosted by the Embassy of Japan was held at the Old Ambassador’s Residence to introduce the participants to local leaders in U.S.-Japan relations. Representatives of the sponsoring organizations (Toyota Motor Corporation, Mitsubishi Corporation and Hitachi Ltd., and Morgan Stanley) as well as U.S.-Japan Council members were also in attendance.

The program culminated in international team presentations. Participants were divided into four international teams, each with four Japanese and three American students. The international teams were tasked with developing a civil-society based initiative/project focused on Tohoku and presenting it at a final session of the U.S.-Japan Research Institute’s USJI week. USJC members Lauren Ohata and Yuuki Shinomiya served as project coaches, sharing their expertise and advising a group on various aspects of the project development. Edson Mori representing USJC  joined President Katsuichi Uchida (USJI) and Christopher Joseph Cook (TWC; Keel Point Advisors) as a project judge for the final presentations. The teams did feel some pressure, because the final presentations were a competition, wherein Americans on the top two teams will travel to Japan in August 2014, be reunited with their Japanese teammates, and travel to Tohoku to learn about cross-sector partnerships in the region and share their ideas. 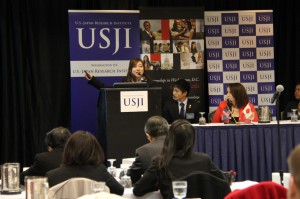 The four groups presented thoughtful and innovative projects ranging from a traveling mental health mobile linking affected communities to a commemorative museum in Tohoku at the sight of Okawa elementary school.  It was clear that they had really embraced what they learned through the program. When the winners were announced the tears that flowed and the hugs shared between the participants were clear evidence of how transformed they were by this experience. During the closing lunch, participants expressed their feelings about the program. One American participant stated that although she had participated in programs like this before, she had never befriended or learned so much from international peers to the degree she had with this program. A Japanese student said that while he was excited about what happened during the program, he was looking forward to continuing that enthusiasm and collaboration when he returns to Japan.

The Japanese students departed Washington, DC for Tokyo, where they attended a reception at the Tokyo American Center on March 3, 2014. 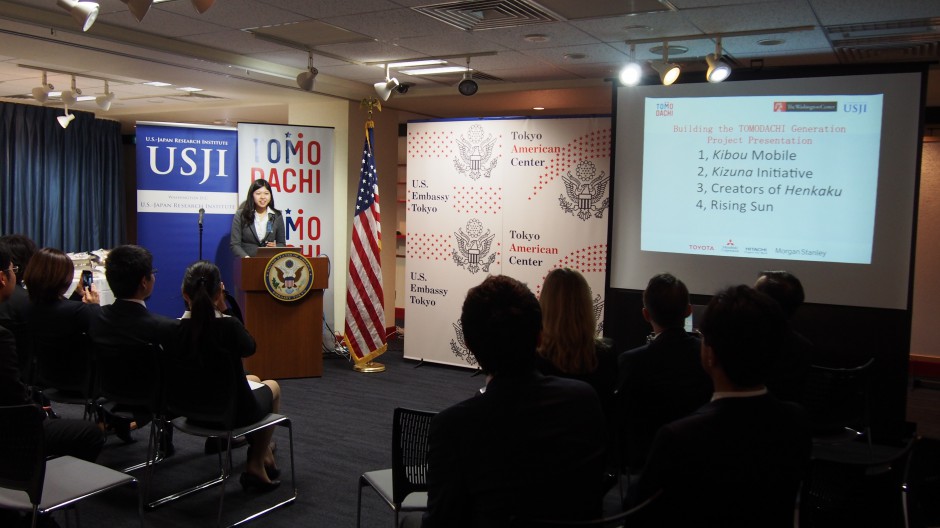 On March 3, 2014, sixteen Japanese university students gathered at the Tokyo American Center after returning from a two week program in Washington D.C.  The students, along with twelve American university students, participated in a rigorous curriculum that developed leadership skills and enhanced their knowledge of civil society.

Students presented project proposals that they developed in the U.S. to representatives from donor companies, top universities, the U.S.-Japan Research Institute, the Washington Center, and the U.S. Embassy in Japan.

TOMODACHI Initiative Executive Director Laura Winthrop Abbot and U.S.-Japan Research Institute President Katsuichi Uchida delivered opening remarks. Both expressed that participation in the program made students more confident in their abilities and that the benefits from the program will continue to extend for years to come. 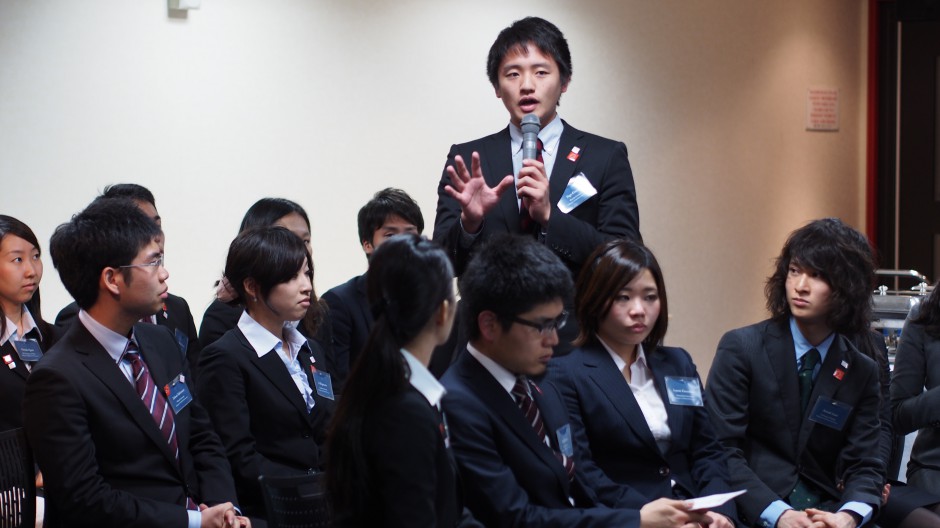 The Washington Center Managing Director Linda Cotton introduced the students and provided an overview of the program, titled: “Building the TOMODACHI Generation.”

She explained that the most important thing was to recognize that each student came at problems with different approaches that reflect their own cultural beliefs.“These truly are the next generation of leaders,” she said. “They went out of their comfort zone to do something new, and it has been my pleasure to work with them on this program.”

Kaori Nishio presented on Kibou Mobile, a traveling vehicle with activities and projects to encourage people to have active communication within and between communities. The project would provide communities with a mural to share their experiences from March 11 then combine them as one large mural.

Asuka Kobayashi explained the Kizuna Project saying, “our mission is to build homes.” The project would select students for a two week educational program to learn about teamwork, go on a home stay program in Tohoku, and partner with a nonprofit organization to build homes in the area.

Noriaki Santo presented on Operation Sakura Lens, a project to inspire students to have an interest in photojournalism by hiring photographers to go to schools and document stories of disaster relief and remembrance from students. Sayumi Kawashima presented on the Okawa School of 3/11 National Museum, a project to create a museum in Tohoku to “preserve the memories of those lost and educate the public” for years to come.

Jay Sapsford, Managing Director & Chief Administrating Officer of Morgan Stanley MUFG Securities Co., Ltd. shared his experiences growing up in Japan and the U.S. and expressed his support for the program. He emphasized, “the skills that you learned on this program are skills that you will be called upon to use every day of your careers.”

The two winning project teams, Kibou Mobile and Kizuna Project, will be reunited with their American counterparts this summer in Tokyo for more in-depth discussions.

Voices from the TOMODACHI Generation

After the presentations, each of the sixteen students shared their experiences on the program. Here are some of their comments:

“Every individual was able to combine their leadership to have a good program. This was a life changing experience.” – Noriaki Santo, University of Tsukuba

“I truly believe that we the TOMODACHI generation can make a difference in the future of Japan, the U.S., and the world.” – Asuka Kobayashi, Keio University

“I really want to do something to strengthen civil society in Japan when I start working for the private sector.” – Kaori Nishio, Doshisha University

“The biggest achievement was that we could build a bond. I would like to keep and strengthen that bond between the U.S. and Japan.” – Haruka Ouchi, University of Tsukuba

“Before I went to the U.S., I only knew about it through textbooks. I am confident that the U.S. and Japan can work together to create new opportunities.” – Takumi Nakamura, Waseda University