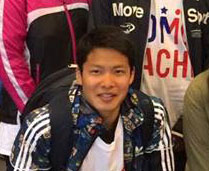 He was born and raised in Kagoshima. He is currently a student at Sojo University, where he executes his passion for technological innovation in the Engineering department.

The University Venture Grand Prix Entrepreneurship Contest (UVGP) is one of the biggest entrepreneurship contests in Japan, and a wide range of teams enter with hopes to further improve their ideas and give publicity to their potential businesses. When Mr. Ueno heard about the contest, he was immediately attracted to the Venture Company and the work that they do.

He and his colleague, Kazuki Tsutsumi decided to enter the contest and propose “MoonGlass”.

“MoonGlass” is glasses with lenses that adjust the light to make nighttime appear like daytime. In contrast to its compact and wearable size, the glasses have installed the same technology used in camera lenses that brighten dim and dark shots.

Awarded the 2015 TOMODACHI Social Entrepreneurship Award for their work, they were thrilled to be given the opportunity to travel to Silicon Valley, California and present “MoonGlass” to venture capitalists, startups, and student entrepreneur groups. They were able to promote their creation and also attain new inspirational ideas from the people they met.  In addition, they had the opportunity to attend presentations and lectures on entrepreneurship and be given advice about entering the U.S. market. He reflects that for him and Mr. Tsutsumi, it was refreshing to receive feedback from new and different perspectives than those from Japan.

Soon after he returned to Japan on March 25, 2016, a disastrous Earthquake hit Kumamoto. Overwhelmed with deep sorrows, he wanted to be hands-on with disaster relief and help as much in his power as possible.

TOMODACHI created countless opportunities for “MoonGlass”, and he knew the initiative would continue to do the same for him as an alumnus. He channeled his unconditional pride as a TOMODACHI Alumni, and partook in the TOMODACHI Alumni Disaster Resilience Training Program.

From April 25-27, 2016, Mr. Ueno was one of the five TOMODACHI alumni to visit some of the affected areas in Kumamoto. Along with Tohoku students who were directly affected by the Great East Japan Earthquake and continue to participate in Tohoku relief efforts, Mr. Ueno helped clear debris, clean homes and schools, and also attended meetings hosted by the Japan Voluntary Organization Active in Disaster (JVOAD). He and the team focused on supporting the elderly and handicapped.

Through this program, Mr. Ueno was shown a completely different side of the TOMODACHI Initiative that he had not been exposed to before. He realized that not only does the TOMODACHI Initiative expand career and networking opportunities, but it also teaches the importance of giving back to the community. The Tohoku students who he would not have met if it were not for this program inspired him immensely.

Whilst doing on-ground volunteer work, Mr. Ueno had the opportunity to speak to various evacuees. As they cried, overwhelmed with feelings of gratitude they said, “so many volunteers have traveled miles to lend us a helping hand”. Each conversation made Mr. Ueno see how much hope he is giving to the Kumamoto people, and the affected areas helped him realize important points about disaster relief in general.

He says that “the needs of the evacuees are constantly changing” as the days since the disaster pass by, and it is important for volunteers to also shift supplies accordingly. Food, water, and shelter are the primary focus of relief immediately after the event but he says, “other needs such as cleaning homes and emotional care also begin to become a problem.” Also, with countless houses completely broken down, there are currently not enough volunteers to help build temporary housing for victims. For farmers in the region, Mr. Ueno realized that the difficulty of reconstructing their homes is taking valuable time away from farming work.

He claims that people must make sure to also attend to foreigners affected by the disaster, and provide them with the same resources and care as the Japanese evacuees.

Lastly, he suggests that there needs to be more communication between the numerous volunteer forces in a disaster area. This can be done in the form of daily meetings, where the forces present and share information. Additionally, he believes that a disaster relief smartphone application would be a good tool to widen the platform of information exchange.