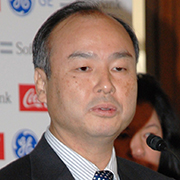 Excerpt of Remarks on the
Launch of the TOMODACHI Softbank Leadership Program
February 3, 2012

“The Ambassador contacted me and asked me whether I’d think about working with him on the TOMODACHI Initiative.  Many things are possible, but in particular, I believe the students from Tohoku have received warm support and encouragement from the government and around the world.  As part of this, I would like to help students to break away from the hurt that they must be feeling right now, and realize their future possibilities and the bright future that lies ahead.  My hope is to be of some help to these students.

For this program, 300 high school students from the disaster-affected area in Tohoku will be selected to attend the University of California, Berkeley for three weeks during their summer vacation for English study sessions and leadership development.

This program has been designed based on my personal experience when I was 16 years old and visited America for the first time.  Until then, I had been born and raised as a Japanese named Masayoshi Yasumoto.  At school in Japan, my friends thought I was just another Japanese person, but deep down inside I knew that the truth was that I was of Korean nationality, that my name is Masayoshi Son, and it was an internal struggle for me.

When I was in middle school, my father was hospitalized for liver and intestinal problems and while he was in the hospital, my family was depressed.  With my father in that situation, we were economically unstable and it was tough.  Our family had some difficult times and I was plagued emotionally by the issue of my nationality while I was still in middle school and high school.

During the summer of my first year in high school, I wanted to find a way to resolve my inner turmoil regarding my nationality, so I went to UC Berkeley for three to four weeks to study.  It was my first time abroad. I still remember the time I came off the airplane, and the first thing I saw was the California sky.  I was moved by how high and how blue the sky was, and the diverse people around me.  I saw Caucasians, Asians, and African-Americans, walking, talking, and laughing together.  I wondered why I was so worried about such a small thing.  The world is one.

In this America where there is freedom and the American dream, I decided that I wanted to learn something in the three weeks that I was there and take it back with me.  That was the turning point in my life.  After I returned to Japan, I immediately dropped out of school and signed up to study abroad in the United States. If I had not experienced America then, my life would have turned out completely differently. With this experience, my life changed drastically.  My dreams and my hopes were born there.  Of course, there were difficult times and tough problems after that, but that is where I found hope.

The students from the disaster-affected areas will have difficult times ahead. But, if through this program I can change one, even two lives which will in turn affect their families, our children and our friends, and they are provided the opportunity to challenge themselves, to realize that the world is a big place and that the skies are high and blue out there in the world, I will have done my part. Let us all support them.”