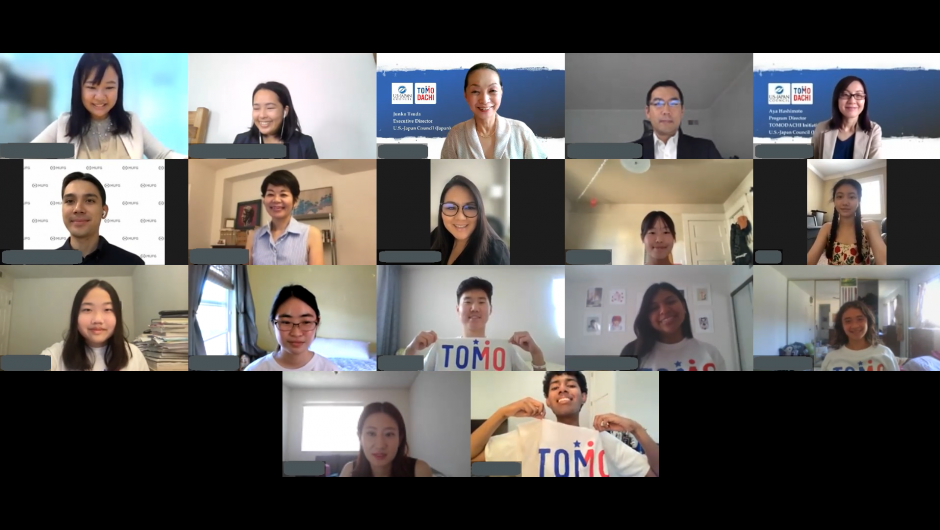 11th TOMODACHI MUFG International Exchange Program started with virtual orientation on May 9th and concluded with a Final Presentation on August 6th.

On May 9th orientation, Kanetsugu Mike, Chairman at Mitsubishi UFJ Financial Group, and Suzanne Basalla, President and CEO at the U.S.-Japan Council, attended and welcomed the participants.

The program was then followed by three trainings on “Leadership and Resiliency.” In the first session, the students learned about the history of Japanese Americans from one of the USJC members, Jim Minamoto. The story touched upon many historical events, such as World War II Hiroshima/Nagasaki atomic bomb, but was told through the eye of one incredible woman who demonstrated tremendous resiliency. One of the participants, Sarah Okuno, said, “learning about chosen and unchosen suffering was a new and unique concept. I will definitely incorporate what I learned, knowing when you can improve your situation and doing it differentiates from trying to fight with your past and regretting what happened, into my life”.

The second session was led by three TOMODACHI alumni from the Tohoku region, Ayaka Obata, Ryota Konno, and Yuta Noji. While some participants had never heard of the Great East Japan Earthquake, three alumni shared their experiences through the disaster they went through during high school. Three alumni also shared how the TOMODACHI programs have impacted their lives and how they have continued their studies and careers. One of the participants, Aurora Wu, reflected “TOMODACHI program has taught me the importance of passion and resilience. The stories of the TOMODACHI alumni were inspiring and motivating to hear how they found their passion and stuck to them. Growing up with multiple experiences of changing environments, including school, city, and country, resilience is one of the essential lessons I have learned. Recovering quickly from difficulties can help us have a better mentality and achieve our goals”.

During the third week, six TOMODACHI alumni from Tohoku who joined last year’s program have prepared a video to introduce their high school lives in Japan. American and Japanese students cultivated friendships by sharing their interests and found countless similarities despite diverse cultural differences. The program concluded with the participants sharing what they had learned and how they will stay connected with the TOMODACHI community.

Aug 22, 2022
ABOUT US
PROGRAMS & ACTIVITIES
NEWS & MEDIA
GET INVOLVED
CONTACT US