Viewing educational support for the next generation as a priority in its social contribution activities, Sumitomo Corporation has endorsed the spirit of the TOMODACHI Initiative by becoming a Strategic Partner in December 2013. Sumitomo Corporation has provided scholarships through the “TOMODACHI Sumitomo Scholarship Program” for four years between 2014 and 2017. It has supported 28 Japanese students who had taken up the one year study abroad program.

In addition to extending this scholarship program for the next four years, Sumitomo Corporation and TOMODACHI are also considering to expand the number of partner Japanese universities and offer supplementary programs to complement the scholarship program. The extended contribution to TOMODACHI is valued at 10 million yen. The scholarship program continues to offer opportunities for scholars and alumni of the program to connect and inspire each other, even after the completion of their study abroad experiences, though networking activities with an aim to create a community among program participants and alumni.

Sumitomo Corporation will continue to support the next generation leaders who will act as a bridge and contribute to strengthening the relationship between the United States and Japan in the future. 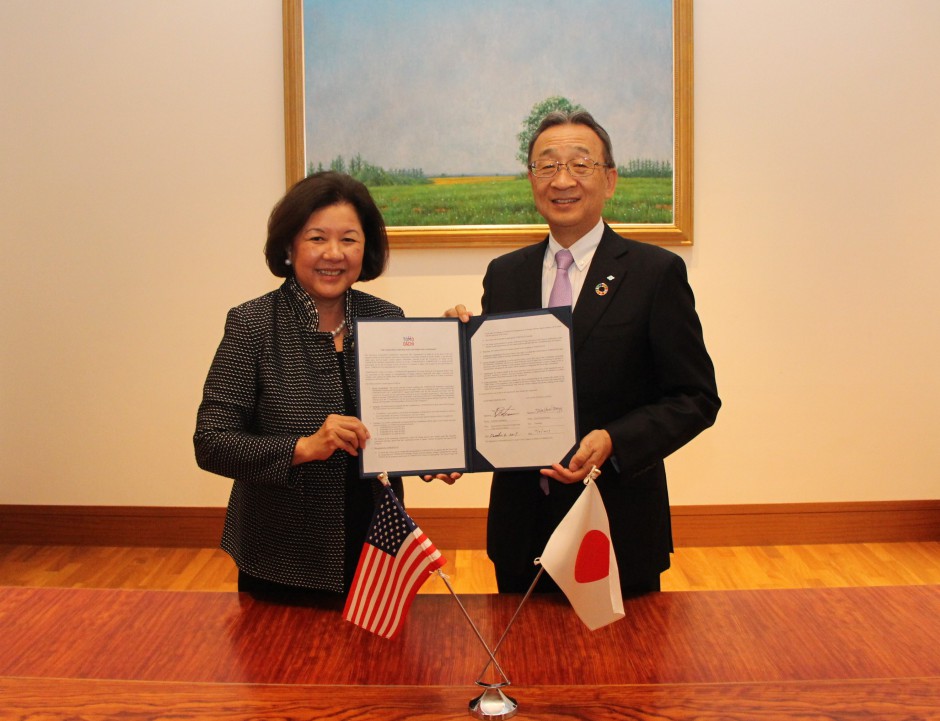 Photo of the Signing Ceremony

1: The TOMODACHI Initiative is a public-private partnership between the U.S.-Japan Council and the U.S.  Embassy in Tokyo, with support from the Government of Japan. Born out of support for Japan’s recovery from the Great East Japan Earthquake, TOMODACHI invests in the next generation of Japanese and American leaders through educational and cultural exchanges as well as leadership programs. The initiative seeks to foster a “TOMODACHI Generation” of young American and Japanese leaders who are committed to and engaged in strengthening U.S.-Japan relations, appreciate each other’s countries and cultures, and possess the global skills and mindsets needed to contribute to and thrive in a more cooperative, prosperous, and secure world.  Visit us at www.tomodachi.org.

2: ‘Alumni’ refers to past participants of the TOMODACHI programs.

Dec 04, 2017
ABOUT US
PROGRAMS & ACTIVITIES
NEWS & MEDIA
GET INVOLVED
CONTACT US