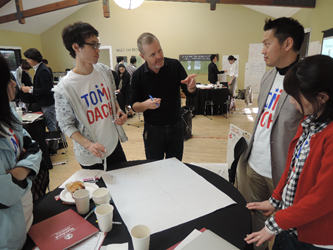 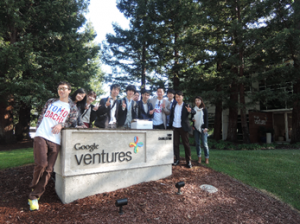 The winners of the 2015 TOMODACHI Social Entrepreneurship Award (Team DREAMPHAROS from the Japan Advanced Institute of Science and Technology) went to Silicon Valley from March 9-15, 2015 to present their ideas to American venture capitals and influential startups such as Draper Fisher Jurvetson, Fenox Ventures, and Global Brain; int­­­­­eracted with their counterparts at Stanford University D-School, UC Berkeley, and Code for America’s Civic Hack Night.

Team DREAMPHAROS from the Japan Advanced Institute of Science and Technology (JAIST) developed an interactive communication service called “Yume-chou” that preschools can use to communicate with parents. Currently most schools use paper-based notebooks called “Renraku-chou” to send daily updates, but this project aims to position Yume-chou as a digital Renraku-chou, thereby creating a more efficient communication channel for childcare.  Yume-chou is based on cloud computing technology and can support real-time communication between parents and school officials. 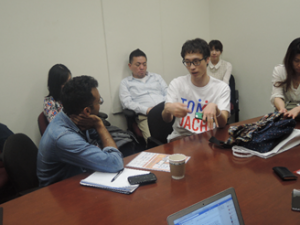 The awarded team visited venture capitals, universities and non-profit organizations through which they were exposed to various viewpoints from these diverse organizations. The venture capitalists provided necessary constructive criticism to Team DREAMPHAROS who realized that their business plan needs to be much more organized to think about the end-user.  At Stanford University and UC Berkeley, they joined a “Design” workshop to brush up their business plan and product design. This program is a very new approach for business and product design, and it provided inspiration to the awarded teams on how to restructure their own business plans.  At Code for America, a leading NPO in the U.S., team members joined their popular Hack Night workshop program and discussed their action plans on how to improve the city of San Francisco. The students provided open feedback to one another in a comfortable environment. Team DREAMPHAROS came away from this appreciating the depth of thought and feedback received from the people they met in the States.

The TOMODACHI Social Entrepreneurship Award was given at the University Venture Grand Prix competition held in December 2014, hosted by Ministry of Economy, Trade and Industry (METI) and supported by the Tokyo New Business Conference (NBC) and Nomura Research Institute (NRI). Close to 70 groups from undergraduate and graduate schools across Japan had applied, and the top nine groups were selected as finalists to present their ideas to a panel of judges comprised of teachers, entrepreneurs, corporate executives, and a nonprofit leader.

Mar 20, 2015
ABOUT US
PROGRAMS & ACTIVITIES
NEWS & MEDIA
GET INVOLVED
CONTACT US