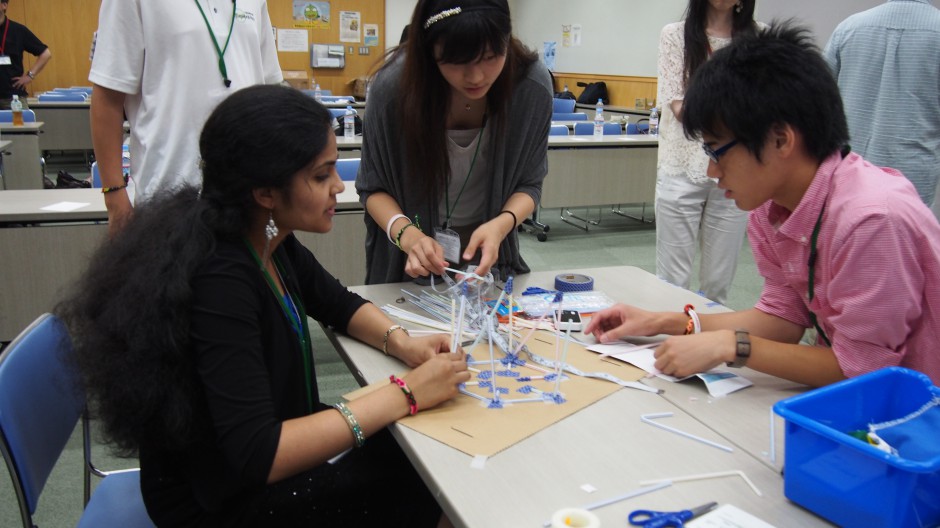 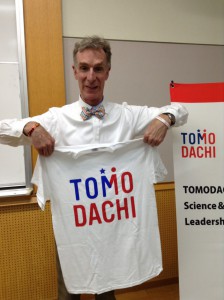 The TOMODACHI Toshiba Science & Technology Leadership Academy brought together High School students from the United States and Japan to work collaboratively to identify problems and find creative solutions in order to create a disaster-resilient smart community, all while cultivating long-lasting friendships beyond their borders. They were joined by Bill Nye “The Science Guy,” who shared inspiration, advice and his quirky sense of humor with the participants.  The program made a long-lasting impact on many students, including Takahiko Shibata from Waseda University Senior High School whose interests in science strengthened after this program. He hopes to make the world “a better place through the use of science and engineering.”

This program offered the opportunity for sixteen High School students from the United States and Japan to learn extensively about many current environmental issues, specifically related to disaster relief and resilience. They visited the Life Science Center, Toshiba Science Museum, and Meiji Shrine’s large wildlife preserve to better understand disaster-resilient community building while exploring various aspects of Japanese culture. Ayling Dominguez from The Bronx High School of Science in New York said, “it was great to get to learn from and in collaboration with Japanese students.”

On August 7, 2014, the participants and supporters of this inaugural TOMODACHI Toshiba Science & Technology Leadership Academy gathered at the National Olympics Memorial Youth Center to present and highlight the events of the past seven days. Working in teams, each comprised of students and teachers from both countries, they developed a plan for a disaster-resilient smart community for the future. James Savoldelli of Columbia Grammar and Preparatory from New York said, “[p]resenting our vision for a smart community based on advancements in science and technology was truly a special experience, and getting to present in front of important people in one of the world’s largest tech companies added to the excitement.” 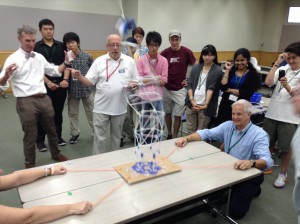 For their final project, the four teams each picked one city to focus on to plan a disaster resilient community. Team Sapphire chose Ishinomaki City (Great East Japan Earthquake and Tsunami of 2011) and discussed the importance of cultural tradition and heritages to nurture community pride to encourage residents to stay and develop their local community. Team Gold chose New Orleans (Hurricane Katrina in 2005) and how their effort to confront hurricanes can be applied to cities in Japan. Team Emerald chose New York City to discuss how a mega-city can combat pollution and achieve high energy sustainability by utilizing today’s latest technology. Team Ruby chose Kinshasa, the capital city of Democratic Republic of Congo. They presented an original idea to improve the living condition in Kinshasa through better water conditions, and called it “The City of Limitless Potential.”

Bill Nye provided closing remarks and encouraged the students to“feel the joy of discovery and dare I say it…Change the world!” He went on to explain that there might be those who give up or don’t want to bother changing the world, but he told the participants that “you all as TOMODACHI, you’re going to do that.”

At the end of the session, Patrick Adams working with the National Science Teachers Association who created the program along with Helene Nameth, distributed a blue marble to each participant and reminded them that the marble represents the Pacific Ocean that connects Japan and the United States. The bonds of friendship that the participants have created through this program will help them develop into future leaders who will promote collaborative relationships between our two nations, on both sides of the Pacific. They will create innovative approaches that will promote creative solutions to these problems our world faces today.

This program has undoubtedly enhanced mutual understanding through cross-cultural exchanges and science education among the next generation of Japanese and Americans. After the presentations were done, the students and teachers gathered together to express their appreciation for the program and each other. The Japanese students gave out a very thoughtful gift – a colorful shikishi  full of heartwarming messages to each of their fellow American students. Some of them could not hold back their tears while they read the messages and hugs were given out in large quantities. The students and teachers wrapped up the program by promising that they will keep in touch, and that they will be the driving force of the TOMODACHI Generation. Shoulder to shoulder, arm in arm, “let’s end with how we’ve been ending every night in Japan” said Patrick Adams. “Three, Two, One… TOMODACHI!”

Take a look at the participants building a wind and shock resistant straw tower with Bill Nye:

Aug 29, 2014
ABOUT US
PROGRAMS & ACTIVITIES
NEWS & MEDIA
GET INVOLVED
CONTACT US