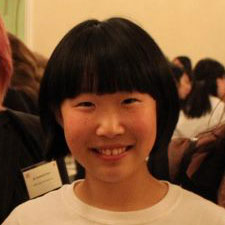 Koto Endo participated in the TOMODACHI Summer 2013 Coca-Cola Educational Homestay Program and had an opportunity to live in Burlington, Vermont.  She was selected to participate in the TOMODACHI BEYOND Tomorrow Global Leadership Academy 2014, where she reunited with old friends, realized the importance of teamwork and what it takes to be a leader.

“From March 7-9, I participated in the BEYOND Tomorrow Global Leadership Academy in Tokyo for the first time; I am still struggling to put into words how wonderful the atmosphere was. 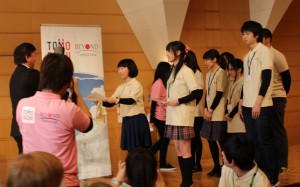 Our team won the top prize for our presentation, and it overwhelmed us with joy and disbelief that we actually cried; it was something that we were only able to achieve because everyone in the team worked together.  My teammates were always willing to listen to my opinions, even the occasional selfish and narrow-minded ones. We encountered some difficulties along the way, but thanks to the Merrill Lynch mentors, we were able to motivate ourselves even when the discussion appeared to be losing momentum. They taught us to strive to achieve what we set out to do, and to always see the discussion through to the end.

Reaching a point where I can accept the realities of the Great East Japan Earthquake and release my emotions as tears was a massive step for me; one that I did not realize I was capable of making. It is undoubtedly thanks to the special atmosphere at BEYOND Tomorrow, an atmosphere that does not exist at school, that I was able to make this step.

However, I still struggle to accept the fact that I can only feel truly appreciated on a TOMODACHI program. Why is it that I always feel inadequate in my regular surroundings?

Therefore, rather than following the crowd, I want to be able to act independently and get out into the world, where I can discover friends who understand who I really am and will stand by me. Mayo-san told us about surrounding ourselves with good people: at BEYOND Tomorrow I was certainly able to do this, and forged many strong friendships. 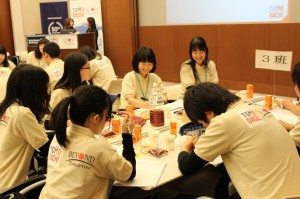 I have so many fond memories from those three days that I don’t know where to start, but the one thing that I can confidently say, as I said to everyone is that I truly believe I will develop into a leader.

As I struggled through high school unable to clearly develop my ideas, I lost confidence and I began to believe I was inadequate. However, I plan to take what I have learned from my mistakes and shortcomings from a difficult time and apply them to learning ways to formulate new ideas.

The real prize from this experience, however, was learning to believe in myself, and realizing that, unless I have faith in myself, I cannot expect others to place their faith in me.

At TOMODACHI BEYOND Tomorrow, I felt as if I was reborn. Thank you for giving me a setting where I can shed my tears of emotion. Thank you for teaching me that believing in others and relying upon them is often better than attempting to tackle a problem alone. I am delighted to have been able to attend the Global Leadership Academy.”

On December 13, 2013, Koto Endo was invited to the US Ambassador’s residence to participate in a roundtable with other TOMODACHI alumni, in addition to US-Japan Council President Irene Hirano Inouye and US Ambassador Kennedy.  The following is her story she told at the roundtable. 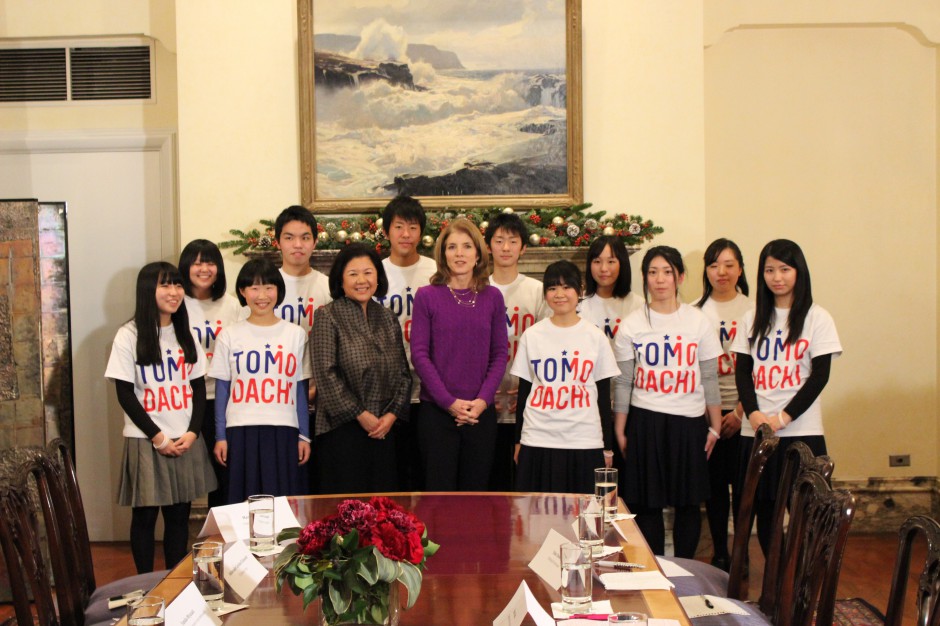 Hello, my name is Koto Endo. It is a great honor to be here and I appreciate this opportunity to represent the TOMODACHI generation. On March 11th, when the earthquake happened, I was a junior high school student. Our school was the only school that was damaged by the earthquake in the inland area. My old school building could not be used, so we had to study at another school. The only available space was a judo studio. The room became 40 degrees in summer and dropped below zero in long cold winter.

Although I was a victim of the earthquake, I was also a supporter to those who experienced greater loss. So I came to think I have an important story to share with the American people and that I do not want people to forget about March 11th. These were the reasons why I joined the TOMODACHI Coca Cola Educational Homestay Program.

On this program, I visited Washington, DC, Atlanta, and Burlington, Vermont. I had been interested in Martin Luther King and racial discrimination. I respect him and I want to be like him. It was like a dream for me to visit the King Center in Atlanta. I also homestayed in Burlington. It is a beautiful town and I got a wonderful family. Now, Burlington is my second hometown.

Now, I’m a student council president at my school. I’m trying to organize volunteer activities for Tohoku with the students. I think the best thing to do for Tohoku is “To help generate connections between people.” It is our mission to share our experience with people all over the world.

I’m just a high school student now but I really want to become an ambassador like you to strengthen the U.S. – Japan relationship. I hope U.S and Japan will stay as TOMODACHI (Friends) forever. 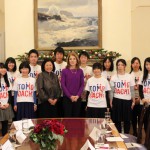 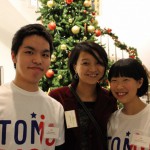 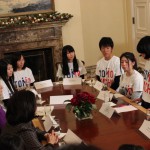