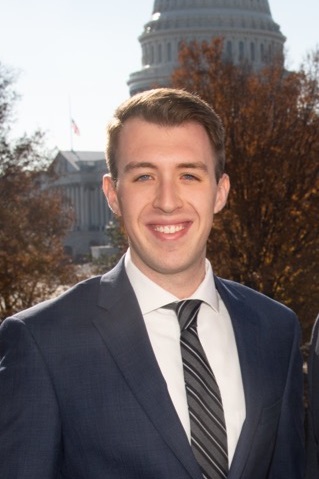 Colin Timmerman is the Legislative Assistant handling foreign affairs and national security issues for Congressman Ted Yoho (Florida, District 3), the Ranking Member for the House Foreign Affairs Subcommittee on Asia. Colin previously worked on foreign affairs and judiciary issues for Senator Charles Grassley (Republican, Iowa) and former Senator Jeff Flake (Republican, Arizona), and has an established professional and academic background in East Asian affairs and Japanese language. He has also participated in past TOMODACHI programs, including the TOMODACHI Daiwa House Student Conference V in Chicago in 2017 and the 2018 USJC Annual Conference in Tokyo as a TOMODACHI Youth Leader Participant. Colin is an Iowa native and received a BA in Political Science from Drake University with a triple minor in Data Analytics, East Asian Studies, and Japanese Language.

The interview was held on August 23rd, 2020 by Reika Mihara, TOMODACHI Alumni Intern (2020) based out of Tokyo, Japan.

Q1: What have you discovered about working in politics during two and a half years of your career?

The beauty of the American political system is that anyone can get involved – a mother, a high-level lobbyist, a congressman, and even a high schooler. I think the beauty of the system is the accessibility. You have so many people from different backgrounds and experiences, and all those points of view come together to inform policymaking at the local, state, and federal level.

If you choose to go into policymaking rather than campaigning, you’ve got to learn how to cooperate effectively with other people, especially those you disagree with. I work every week with people that I have some serious disagreements with, but we still manage to get along and accomplish shared objectives at the end of the day. That’s really how our government is supposed to work. Unfortunately, we live in a time where the two sides are finding it harder and harder to come together. I hope that with a new generation more and more people will enter politics with the willingness and ability to work with people with divergent viewpoints for the common good.

I think when you enter politics you need to have a clear sense of not only what your opinions are but also where your moral compass is at. When you work for a member of Congress, you are never going to have someone who you agree with 100 percent. Of the three members I’ve worked for over the past two and a half years, I have never agreed with any of them 100 percent of the time. I’ve always been able to find some sort of disagreement with anyone, but the more important goal should be to search for common ground, compromise, and agreement. There is definitely a time for standing up for what you believe in and not budging on an issue, but at the end of the day government is about reconciling those differences and softening those absolutist stances towards common action. So I ask myself when working for a member: “Do I agree with this person enough to point where I can support them effectively?” The answer has been yes for everyone that I’ve worked for, and it will continue to be yes for jobs I accept in the future.

Q2: We have had a hard time with many changes due to COVID-19. How do you think we can cope with these circumstances?

I think there are a lot of ways to address this question. You have people around the world who are trying to figure out how we cope with such drastic changes. But I have a lot of faith in humanity being really adaptable to changing circumstances. I think that we’ve seen that adaptability play out over this past year. I do believe that everyone is going to find a way to get out of this. People will just keep doing what they have to do to make it to the next day.

Q3: Could you share your story of how you became interested in Japan and why you stayed?

My interest in Japan goes back to my first year of college when I decided to take a class on modern Japanese history on a whim. Almost immediately I fell in love with Japanese history and culture and just about everything from the modern era. Then in 2017, I decided to study abroad for a semester at Kwansei Gakuin University in Nishinomiya, Hyogo. I learned a lot while living in Japan, and the experience influenced many of my views.

Now, I have the chance to put that experience to good use in working for the ranking member of the Asian Pacific Committee. I think that if you’re going to specialize in a specific region or country, it’s really essential to know what that place is like on the ground and actually meet people who live there to get an authentic view of the region and be able to translate that experience to an outside audience. Being able to live in a country also gives you a great opportunity to broaden your gaze, sharpen your critical thinking and reconsider some of your preconceptions towards other foreign countries.

Q4: How do you look back on your experiences at the TOMODACHI Daiwa House Student Leadership Conference?

The experience really opened my eyes to how many ways exist for getting involved in the U.S.-Japan relationship. The relationship does not center solely on military or security issues. I was surprised to see so many affect real change in the bilateral relationship through science, the arts, and literature, for example. It was really inspiring to see how many opportunities there are to get involved.

I think getting exposed to people who not only come from different backgrounds but also have very different experiences and opinions from you significantly alters your worldview. It changes the way you think and can strengthen or completely reverse your existing opinions. I think that’s what was most valuable about this TOMODACHI experience. I had the opportunity to meet people from halfway across the world who were completely different from me while also sharing fascinating similarities. I would say that kind of experience is essential towards helping you become a more well-rounded person.

Q5. What does TOMODACHI mean to you?

I think TOMODACHI is very strongly linked to opportunities for positive change in our world. It’s really inspiring to see so many young people involved in that movement and taking advantage of those opportunities.

Q6. How can our audiences in Japan stay updated on what’s going on in the U.S.? How can they distinguish the reliable sources?

The U.S. has a lot going on so there’s no lack of news sources for you to look at. I think the issue becomes which publication you read. What I would recommend is reading a wide variety of news sources from varying ideological viewpoints. Even if you don’t agree with certain news sources, you may still learn something that’s going to be useful or help you better understand those with different opinions from your own.

I also think one of the most useful ways that you can learn about life in U.S. politics is to ask one of your American friends what they think and have a conversation. Maybe they’ll want to learn a bit more about Japanese politics or life in Japan as well, so there could be a really cool exchange of ideas.

I think distinguishing between reliable and unreliable news sources is very important, especially when you realize that everyone has their own biases coming in. Sometimes the trustworthiness of a news source isn’t so cut and dry, and reasonable people can disagree on that. However, I want people to make those decisions for themselves as I have faith in people being independent and critical thinkers.

Q7. How do you plan to stay involved in the U.S.-Japan relationship?

If possible, I would love to keep working on issues relating to the Asia Pacific region, specifically with the U.S.-Japan relationship. I think our diplomatic and security relationship is very important for the region. I am also very passionate about facilitating people-to-people exchanges whether it’s at the diplomatic level or just informal conversation. I really think that there’s a lot to explore in this relationship and I’m very happy to be a part of it.

Oct 29, 2020
ABOUT US
PROGRAMS & ACTIVITIES
NEWS & MEDIA
GET INVOLVED
CONTACT US