TOMODACHI Initiative Announces New Partnerships, Strengthening the Investment in the Next Generation of Japanese and American Leaders 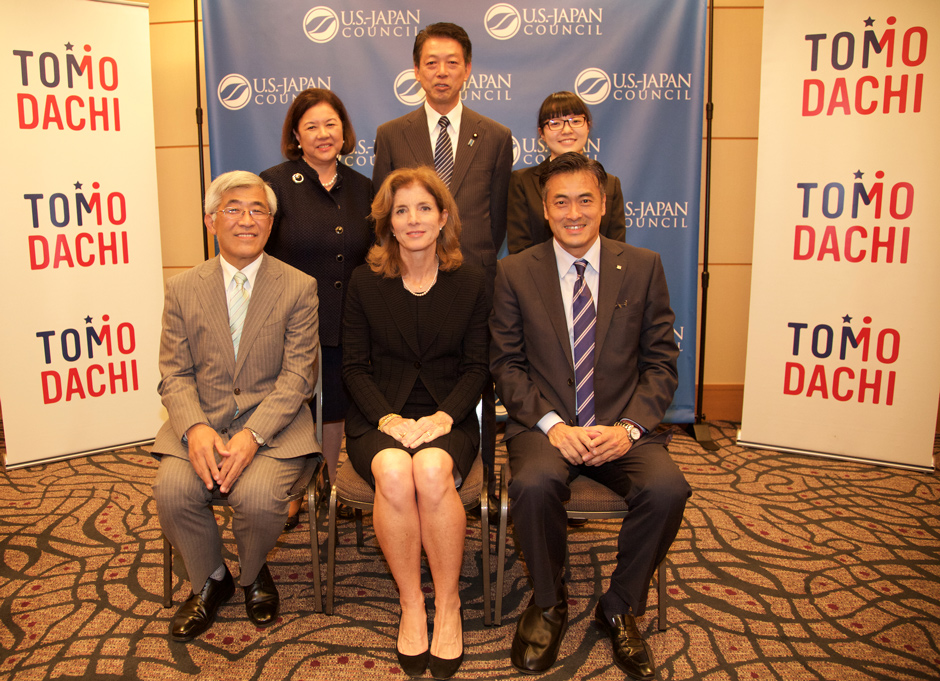 November 9, 2015 – The TOMODACHI Initiative, which invests in the next generation of Japanese and American leaders, announced new partnerships that will further invest in the next generation Japanese and American Leaders. The announcement was made during the TOMODACHI Celebration and Reception hosted at the 2015 U.S.-Japan Council Annual Conference.  Held for the first time in Tokyo, this conference is themed, “Beyond 2020 Vision: Going Global with the U.S.-Japan Partnership.” Distinguished guests who attended the reception included State Minister for Foreign Affairs Yoji Muto and U.S. Ambassador to Japan Caroline B. Kennedy, as well as TOMODACHI alumni and key business and government leaders from the United States and Japan.

In addition, the Japanese Ministry of Foreign Affairs announced to continue” the TOMODACHI Inouye Scholars Program”, a university student exchange program between the United States and Japan. Carried out under the KAKEHASHI Project, this program was developed to honor the life and legacy of Senator Daniel K. Inouye. To further promote such cooperation, the Government of Japan also announced that it will strengthen its partnership with TOMODACHI Initiative.

“I want to take this opportunity to thank our contributors and partners for supporting TOMODACHI and our vision. The TOMODACHI Initiative is an innovative public-private partnership that invests in the future of hundreds of Japanese and American youth every year. The impact is far beyond the program participants. It has inspired and served as a catalyst for donor companies, implementers, and communities that support the program to continue investing in young people. I am proud of the lasting people-to-people connections that have been built through the TOMODACHI Initiative,” remarked U.S.-Japan Council President Irene Hirano Inouye.

“I am grateful to the many corporate and institutional partners who support the TOMODACHI initiative. Through innovative exchange programs, TOMODACHI is creating the leaders of tomorrow who will ensure the U.S.-Japan relationship remains strong,” Ambassador Kennedy said.

About the TOMODACHI Initiative:

The TOMODACHI Initiative is a public-private partnership between the U.S.-Japan Council and the U.S. Embassy in Tokyo. Born out of support for Japan’s recovery from the Great East Japan Earthquake, TOMODACHI invests in the next generation of Japanese and American leaders through educational and cultural exchanges as well as leadership programs. We seek to foster a “TOMODACHI Generation” of young American and Japanese leaders who are committed to and engaged in strengthening U.S.-Japan relations, appreciate each other’s countries and cultures, and possess the global skills and mindsets needed to contribute to and thrive in a more cooperative, prosperous, and secure world. For more information please visit: www.tomodachi.org

About the TOMODACHI Combini Fund:

Initiated by the Japan Franchise Association, the Combini Fund was established through generous contributions by Lawson, Inc. and FamilyMart Co., Ltd. convenience stores. Contributions for the TOMODACHI Combini Fund are made by Lawson through donation boxes and Loppi and by FamilyMart through FamiPort as well as matching donations.  FamilyMart also matches donations made through FamiPort.  This Combini Fund was created to provide programs focusing on education and leadership skills that assist the reconstruction of and support for youth in the disaster-affected areas of the Great East Japan Earthquake.

For Questions Regarding this Press Release

Nov 09, 2015
ABOUT US
PROGRAMS & ACTIVITIES
NEWS & MEDIA
GET INVOLVED
CONTACT US