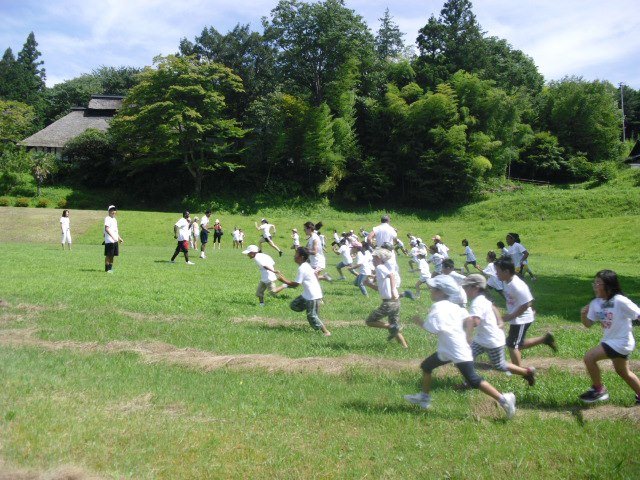 August 16, 2012 — The TOMODACHI Initiative, the Sports Camp of America (SCOA) and O.G.A. FOR AID are pleased to announce that 40 children between the ages of 6 and 12 from Minami-Sanriku, Miyagi Prefecture, participated in an American-style summer camp on August 15-16, 2012. The summer camp took place at the San San Kan in Minami-Sanriku, a town that was devastated by the earthquake and tsunami that struck Japan on March 11, 2011.

The boys and girls from Minami-Sanriku had the chance to play American football, frisbee, soccer, and cheer dance while simultaneously practicing their English in a fun and challenging environment. They were also introduced to traditional American camp activities and games such as “capture the flag,” potato sack races, balloon tosses, and making the delicious treat of “s’mores” around the campfire.

“We are pleased to be partnering with TOMODACHI and O.G.A. FOR AID to give the children of Minami-Sanriku the chance to have a real American summer camp experience with a fantastic group of American camp counselors who are very excited to volunteer their time for these children,” said J.R. Best, Co-Director of SCOA. “Through the universal language of sports and camp, the children had a unique and memorable time interacting with the American counselors and learning about American culture.”

SCOA was founded eight years ago by J.R. and Keiko Best. Their vision is to act as a bridge between America and Japan and to provide a fun environment in which kids can expand their horizons by experiencing and sharing each others’ cultures through the universal language of sports and camp. For the Japanese campers, one of SCOA’s goals is for their camp experience to inspire them to go on to learn English and to learn about other cultures. In addition to its summer camps in Izu and Kiyosato, SCOA’s programs include year-round weekend day camps, overnight camps, and custom camps. More About Sports Camp of America: www.scoacamp.com

O.G.A. FOR AID was formed in response to the Great East Japan Earthquake disaster of March 11, 2011. With the basic standard of “No person left behind,” O.G.A. FOR AID’s mission is to provide relief aid as first responders and to contribute to the rebuilding and recovery of individuals, families, and communities in need. Founded by Erwin Ortiz, O.G.A. FOR AID has set up distribution centers that, to date, have given out 1,500 tons of emergency supplies. Nearly 3,000 families are registered with these centers in Minami-Sanriku. In January 2012, it launched recovery support projects such as the Community Learning Center and the Green Farmers Association. More About O.G.A. FOR AID: www.ogaforaid.org

Aug 16, 2012
ABOUT US
PROGRAMS & ACTIVITIES
NEWS & MEDIA
GET INVOLVED
CONTACT US