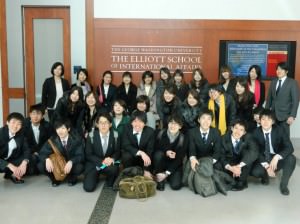 This project involved 28 students from Tokyo and Tohoku engaging in a five month preparatory period in Japan, a three week trip to the United States during the spring of 2012, and a concluding symposium in Tokyo to summarize the findings of the student participants. This project was generously supported by the Japan Foundation Center for Global Partnership, All Nippon Airways Co., Ltd, United Airlines, Tokyo Hiroo Rotary Club, US-Japan Council and the U.S. Embassy in Japan.

“Japanese Student Voices on 3.11” was a rich program that included lectures, seminars, and on-going discussions about topics such as “Visions for Reconstruction after the 3.11 Disasters,” “What should crisis communications include?” and “What can the world learn from the 3.11 disasters?”

Before departure, students visited the areas that suffered from the March 11, 2011 disasters, as well as the U.S. Embassy in Tokyo and various other organizations. In the U.S., they traveled to New York, New Haven, Boston, Washington, D.C., San Francisco and Los Angeles. They met with Japanese government officials at the Japanese Embassy and select Consulates General, U.S. government officials, executives at risk management companies, and young U.S. politicians. They also visited six universities including Yale, Harvard, Tufts, George Washington, and Stanford to engage directly with university representatives and fellow students.