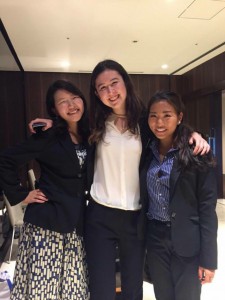 Mariko Nakajima is half Japanese and half American, and she grew up in London, England. She became a TOMODACHI intern at the Tokyo office from February 2016 for five full months during her gap year before beginning University in the U.S. She was an invaluable member of the team, supporting staff during the winter and spring months, then assisting and orienting the new interns that joined in the summer.

After graduating high school in London, Ms. Nakajima had decided to take a gap year before attending Harvard University in fall 2016. During that time, she traveled to China to strengthen her Chinese language ability, worked at a farm in rural Japan, and interned for TOMODACHI Initiative.

She shared her experiences below:

Q: What made you inclined to join the TOMODACHI Initiative team as an intern? 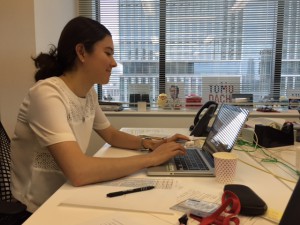 A: I was keen to get involved with TOMODACHI primarily because I’ve been lucky enough to experience multiple immersion opportunities abroad – through academic, as well as sport and volunteer programs – and understand for myself how meaningful these are, and how much of an impact they can have on young people. I wanted to ‘give back’ in some way and contribute towards others having similar opportunities and experiences, and I decided that I would be more useful, and gain more myself from joining this mission at a birds-eye level for a significant period of time, where I could see the behind-the-scenes of a range of different programs, as opposed to getting involved with one specific project.

I was also interested in seeing the cultural interactions between the U.S. and Japan within an organization, and I knew that because TOMODACHI is a relatively small organization, I would be exposed to lots of different circumstances in which this came into play.

Q: How has your multicultural background played into your work at TOMODACHI Initiative? 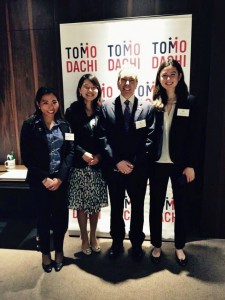 A: I have definitely come to appreciate how much an understanding of multiple cultures can serve as a magnet in bringing people with these common experiences together. Seeing this from the eagerness with which TOMODACHI alumni connect with other students who have been abroad, to the instant click that is visible between members of the U.S.-Japan Council and its Business Advisory Board, I have come to value my background in a different way, and hope to continue to spread opportunities for these types of experiences.

Q: What is one practice you learned on the job that surprised you?

A: I was surprised by how close-knit the team is. The office is an open room, and the work is largely collaborative, so you really do get to know everyone. It’s also amazing just how many programs we do! We have roughly fifty programs per year, and I’m still baffled at how the team keeps track of them all and manages to get everything done, and on top of that, get to know participants on a personal level as part of the TOMODACHI Generation.

Q: What are some skills that you have attained? 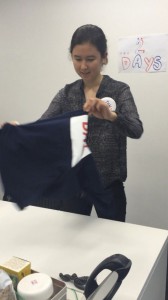 A:  I’m a pro at assembling TOMODACHI banners. I can also fold a T-shirt in 3 seconds.

On a more serious note, one thing that makes the TOMODACHI internship special is that as an organization dedicated specifically to serving young people, TOMODACHI highly values input from their interns, and as a result interns are give a fair amount of responsibility from the beginning. This has meant that I was able to practice and improve a range of different skills, including event management, presentation, networking, and communication skills in various different contexts.

In particular, the TOMODACHI Reception, “Remembering 3.11 – Five Years Later” which brought together over 200 guests from various donor companies, and the TOMODACHI MetLife Women’s Leadership Program Annual Conference, which involved inspiring speakers, female mentors and University student mentees were two very different, very exciting events to be a part of.

Q: What are your plans for the future, and how will your experience as a TOMODACHI intern help you in the future?

A: I will be starting university in Boston in August, and through the internship I have found out about a number of U.S.-Japan related activities happening there.

Moreover, five months of full-time work experience has given me the chance to experience life after university, and the exposure I got through TOMODACHI of both the private and the public sectors, and indeed the interaction between the two, has helped to shape my ideas about what I am interested in doing at and beyond university.