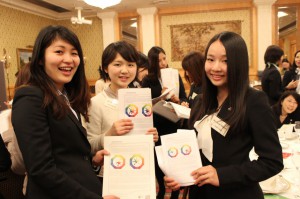 The second year of the TOMODACHI MetLife Women’s Leadership Program kicked off in Tokyo, Osaka, Fukuoka, and Naha in summer 2014 with eighty-two participants. Expanding to two new locations, the applicant pool for participants was larger, more diverse, and more competitive than the previous year. Participants of the 2014-2015 program represent a broad range of student majors and professional backgrounds, including science, health, business, journalism, foreign policy, and academia. Program participants will attend five meetings from June 2014 to February 2015 that will focus on topics including personal development, leadership training, networking skills, and financial literacy.

The TOMODACHI MetLife Women’s Leadership Program mentees participated in the annual U.S. Trip to Washington, DC and New York City from March 20 to 30, 2015. The program was designed to showcase women leaders in the US while inspiring and empowering the young participants.  While in Washingotn, DC, the 38 women met with individuals like Senator Mazie Hirono (D-HI) and Congresswoman Tulsi Gabbard (D-HI2) and leaders of a number of organizations, including the U.S. Department of State and the American Association of University Women. More>> 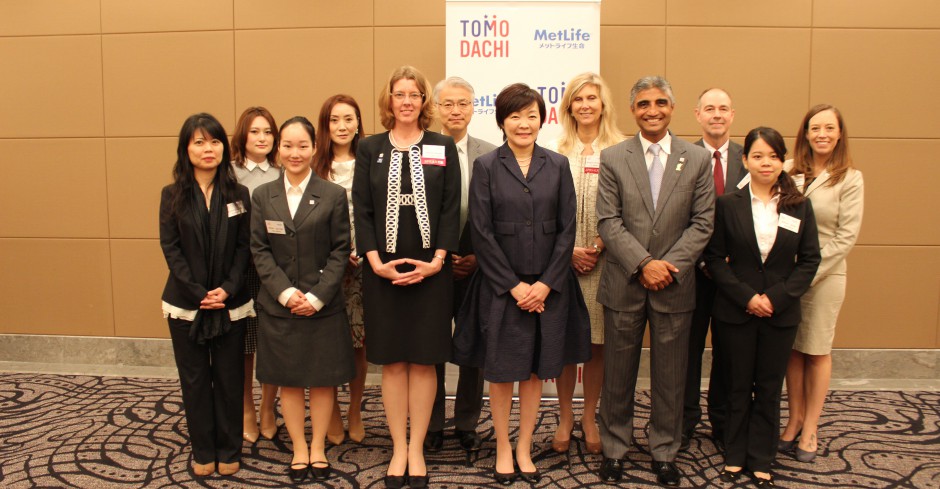 On May 30, 2015, 82 Japanese female leaders gathered at the Cerulean Hotel in Shibuya, full of energy and excitement. They celebrated their accomplishments and reflected with their peers, mentors and mentees with special guest, Japan’s First Lady Mrs. Akie Abe on their last ten months as participants of the TOMODACHI MetLife Women’s Leadership Program. More>> 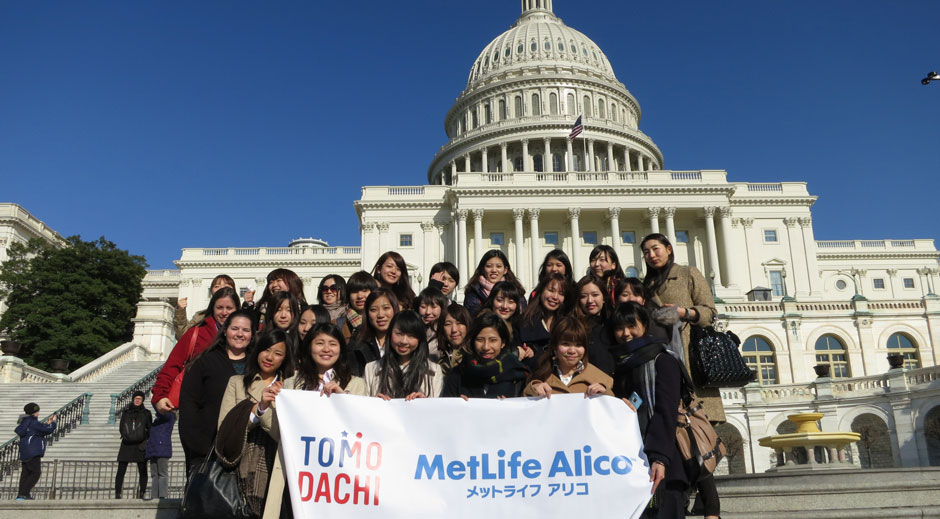 As the capstone to the 10-month TOMODACHI MetLife Women’s Leadership Program, twenty-five female Japanese university students traveled to the United States from March 22-31, 2014 for a visit showcasing examples of how American women achieve success in the modern economy. The program was designed to foster the leadership skills of Japanese women with the ultimate goals of advancing women’s economic empowerment and deepening Japan’s appreciation for American culture and ideals. 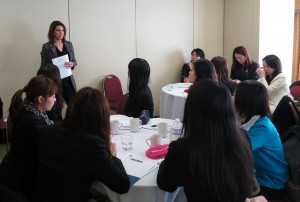 While in the United States, participants met with representatives from various business, education, government, and women’s leadership groups, including the State Department’s Global Entrepreneurship program, the DC Women’s Business Center, U.S. Senator Mazie Hirono, senior female representatives from the U.S. Department of Agriculture, Global Giving, Cove, the Inter-American Development Bank, and MetLife Executive Vice President Maria Morris. Regardless of venue, guest speakers emphasized the same key takeaways: “find your spark,” “don’t let anyone hold you back,” “take a risk,” “seek out mentors,” and “if you don’t do it, who will?”

In addition to their meetings, the group also participated in two workshops. The first was with Kathy Korman of the Hot Mommas Project, an award-winning social venture that pairs the world’s largest digital case study library of female role models with cutting-edge teaching tools. Kathy urged the group to focus on finding more mentors, and talked through a strategy for finding new mentors who can help you stretch beyond your current comfort zone. During the second workshop at the D.C. Women’s Business Center, facilitator Evelyn Bandoh helped participants develop actionable roadmaps for making their dreams a reality.

On March 25, participants joined the U.S.-Japan Council seminar “Delivering on the Promise of Womenomics: How Can Americans Contribute?” and offered some youthful perspectives on women’s empowerment in Japan. One of the key takeaways from this evening was “have the courage to do what you love and have the strength to do it well.” Later in the week the group met with Atsuko Fish, who had a long career as a U.S.-Japan cross-cultural consultant and is currently involved with various social innovative movements as a philanthropist. Atsuko urged participants to focus not only on their personal and professional development, but also on being a good citizen and giving back to their communities.

Participants left the United States infused with new energy and direction, and several will expand upon ideas they developed while on the trip to compete for a TOMODACHI microgrant. 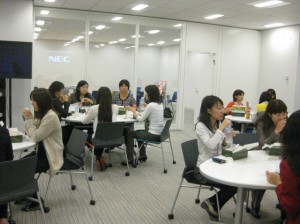 The U.S. Consulate General in Osaka-Kobe and the TOMODACHI Initiative expanded the TOMODACHI MetLife Women’s Leadership Program to the Kansai region.

This program is designed to establish a network of a select corps of Japanese women, consisting of a combination of mid-level professionals and highly-motivated university students who show promise as Japan’s next generation of leaders, to promote women’s leadership and empowerment in the workplace.

Through this regional program, 9 pairs of mentors and mentees joined the larger Tokyo program, which is coordinated by the U.S. Embassy in Tokyo and the TOMODACHI Initiative.   Meeting were held approximately once per month from October 2013 to March 2014.

The Osaka program launched on October 25, 2013.  Guest speaker Yvonne Davis gave an inspirational keynote speech on leadership and communication, and participants met each other for the first time and received their mentor-mentee pairings.  Read More>>

On November 12, 2013, the participants learned how to recognize their own personality traits and strengths and how to make best use of their strengths in becoming a better leader.  Read More>>

On December 19, 2013, the participants learned about networking skills. Read More>>

On January 16, 2014, the participants learned about using leadership skills in a proactive manner.

Regular meetings and sessions are held from June 2013 – March 2014 for 20 mentor-mentee pairs.

Students selected for the program participated in the first Women’s Leadership Program Meeting on June 14, 2013, where they met their mentors.  Read more >>

On September 13, 2013, the participants learned about self-leadership as they collaborated in groups to discover their own latent leadership potential.  Read more>>

On December 6, 2013, the participants learned about networking skills. Read more>>

On February 28, 2014, the participants learned about using leadership skills in a proactive manner. 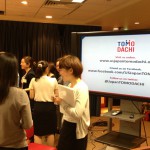 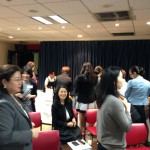 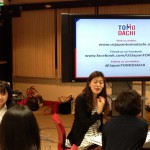 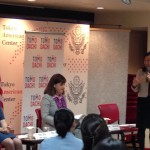 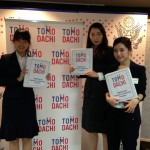 Selected mentees participated in the Women in Business Summit that was held on May 27, 2013.  Find out more about the summit by visiting the ACCJ website.

Several of the mentees who have been selected for this TOMODACHI Women’s Leadership Program attended the Women in Business Summit, hosted by the U.S.-Japan Council and the American Chamber of Commerce Japan (ACCJ) on May 27, 2013.  Find out what they learned at the summit:

“The summit really widen my perspective and changed my future.”
– Miho Tagai from Showa Women’s University

“The summit made my conception toward working turn 180 degrees around and I have found a purpose to achieve.”
– Yuki Ono from Hosei University

“I was highly motivated to develop my leadership skills as a woman.”
– Shoko Oniki from Soka University

Find out what the participants learned from the overall program: 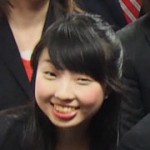 “Leadership is not the power to lead others but the power to inspire and motivate others. I strongly believe that we, the TOMODACHI generation, can take true leadership: to inspire others to share the same vision as us, and make a great difference in the future of the United States, Japan and the world.”
– Asuka Kobayashi from Keio University 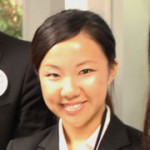 “We’ve learned through this visit to the United States that anything is possible.  The United States and Japan may be different.  But don’t you worry.  When we say “you” we mean Americans and Japanese, men and women, young and old.  Don’t worry about us because we are the future of Japan.  In 50 years, our grandchildren will look back and say that their grandmothers were part of the TOMODACHI generation that changed Japan.”

“During the trip I experienced a lot and learned a lot. Nothing was more fun than forming ideas and making action from a clean sheet of paper. Back in Japan, positive changes are happening to me. I have a clear feeling that anywhere I go, this experience will always give me the drive to go forward without being afraid.”
– Misato Oi from Kyoto University

“Every session was inspiring and I learned a lot of important things. These eight days were really meaningful and I will never forget them.”
– Haruka Satake from Ritsumeikan University