10th Anniversary of the TOMODACHI Initiative is Commemorated in New York

On December 17, 2021, a reception to commemorate the tenth anniversary of the TOMODACHI Initiative was held at Ambassador Kanji Yamanouchi’s residence in New York. USJC President & CEO Suzanne Basalla (third from left) joined the reception along with USJC members in the New York City area and had the opportunity to meet and network with TOMODACHI alumni. 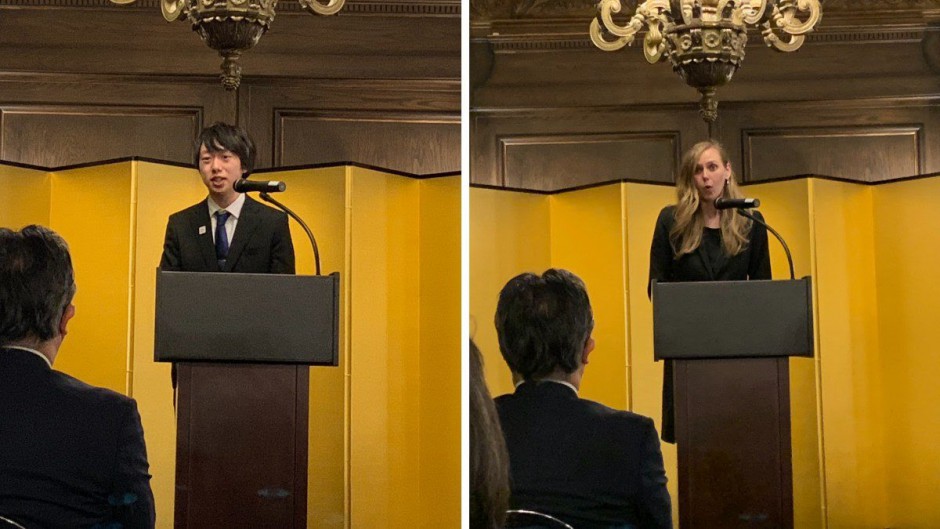 A native of Sendai, Miyagi Prefecture, Mr. Nishigai, who was in middle school when the 3.11 disaster struck, currently attends Princeton University, where he is interested in investigating how to engineer ecosystems for disaster prevention. A two-time participant in the TOMODACHI Initiative, Mr. Nishigai credits TOMODACHI with shaping his life. “Before I participated in TOMODACHI program, I actually never considered study abroad or never considered even going out of Sendai City,” he said. Through his experience in TOMODACHI, he organized a fundraising campaign for victims of an earthquake in Nepal. He says this was his way to “contribute back to the world.”

One of the New York area’s TOMODACHI Regional Representatives, Ms. O’Connell works at the Permanent Mission of Japan to the United Nations. During her time in Sendai as a teacher on the JET Program, she was involved in many activities that assisted residents who are still recovering from the disaster. “The anniversary of 3.11 is very much alive in the Tohoku region,” Ms. O’Connell said. “It is a legacy of pain and grief, but also of human kindness. Of the extraordinary lengths strangers will go to aid one another in times of hardship and the community that forms therein.”

Thanks to Susan McCormac for the above article and photos!

Feb 25, 2022
ABOUT US
PROGRAMS & ACTIVITIES
NEWS & MEDIA
GET INVOLVED
CONTACT US