Alumni attend WAW!2016 events as youth voice strengthens in the Discussion of Women’s Issues in Japan 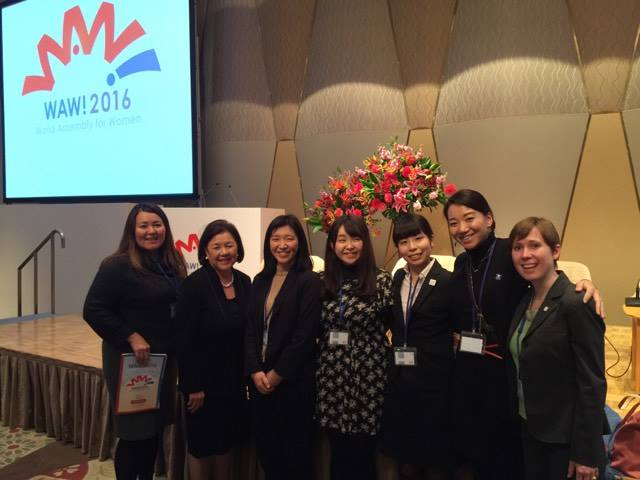 “Today, I strongly felt there are many things that I can do to create change.” – Meina Takayasu, Alumnus of the TOMODACHI Microsoft Social Innovation Program

On December 13-14, 2016, TOMODACHI Alumni took part in the World Assembly for Women: WAW!2016. The conference is one of the efforts of the Abe Administration to achieve a society where “women shine” with leading figures from all over the world attend to lead and take part in various discussions based on women’s issues.

Eight alumni representing six different programs attended the WAW!2016 events such as the Public Symposium on December 13, the high-level roundtable discussions on December 14, and the MetLife Symposium (an official side event hosted by MetLife) on December 8.

The public symposium on December 13 included speakers such as Marne Levine, COO, Instagram; Sadayuki Sakakibara, Chairman, Keidanren; Yuriko Koike, Governor of Tokyo; and Phumzile Mlanmbo-Ngcuka, Executive Director, UN Women (as well as a video message from Aung San Suu Kyi, the State Counsellor of Myanmar). The high-level roundtable discussions included speakers such as TOMODACHI Alumna Megumi Ishimoto, who leads the NPO Women’s Eye and was part of the 2013 TOMODACHI NGO Leadership Program supported by J.P. Morgan, and spoke about innovations in Tohoku led by women after the events of 3.11.

U.S.-Japan Council President, Irene Hirano Inouye, also attended and led one of the high-level roundtable discussions focused on work-life management where she spoke about the benefits of volunteering, as well as the importance of people-to-people relations, as evidenced by successful USJC and TOMODACHI programs like the TOMODACHI MetLife Women’s Leadership Program and the USJC Regional Women in Leadership networking sessions, funded by the Embassy of Japan. The panel gave concrete actionable steps for improvement, such as implementing flexible working hours, remote work and having a strong network of role models, mentors and supporters.

After the events, the eight TOMODACHI alumni who attended the WAW!2016 talked about their inspirations and the need to take action. Yuka Iwabuchi, alumna of the TOMODACHI Sendai-Dallas Young Ambassadors Program, shared her experiences. “It was my first time to participate in a world conference like WAW, and it was a wonderful experience for me. I was inspired by many powerful women like Yuriko Koike who is the Governor of Tokyo, Fumiko Hayashi who is Mayor of Yokohama, Akie Abe who is the Spouse of the Japanese Prime Minister, Shinzo Abe, and so on. We don’t have to hesitate to take action, we should try various things to change the world as a leader. Ms. Hayashi said she wants to be someone who can keep taking action, and I agree with her. I want to keep taking action and try many things.”

Jan 24, 2017
ABOUT US
PROGRAMS & ACTIVITIES
NEWS & MEDIA
GET INVOLVED
CONTACT US