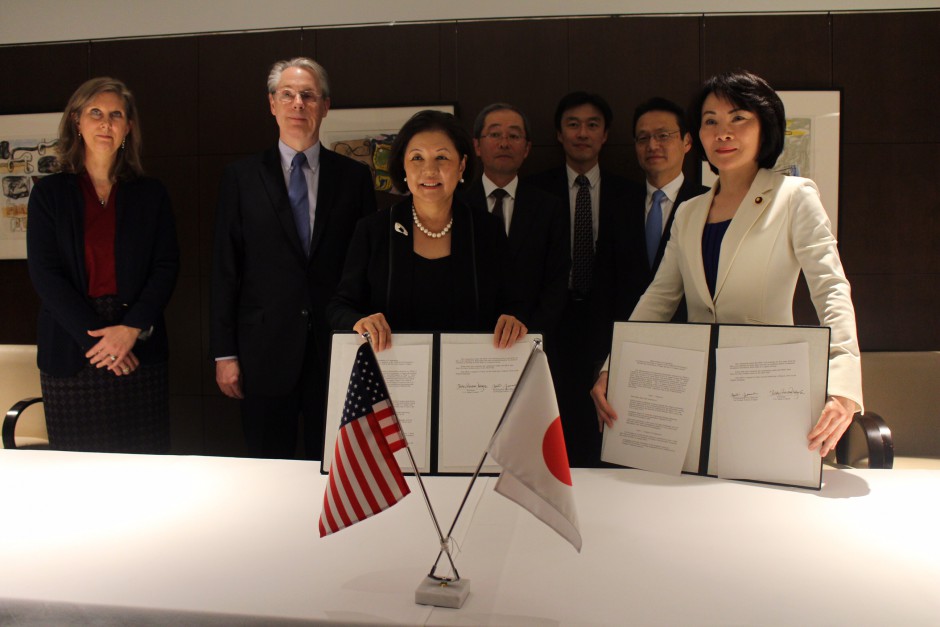 The event featured a signing ceremony for the “Memorandum of Cooperation on Enhanced Partnership in Support of the TOMODACHI Initiative Between the Government of Japan and the U.S.-Japan Council” by Miki Yamada, Parliamentary Vice-Minister for the Ministry of Foreign Affairs (MOFA) representing the Government of Japan and Irene Hirano Inouye, President of the U.S.-Japan Council, embodying the groundbreaking public-private partnership. The Memorandum formally established the relationship between TOMODACHI and MOFA—a relationship which has already existed unofficially for several years. In this connection, MOFA appointed Ambassador Masaharu Kohno as the Government of Japan’s Senior Advisor to the TOMODACHI Initiative. 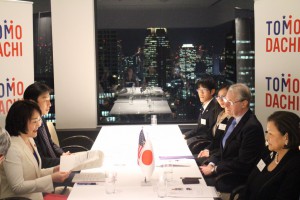 Prior to the signing ceremony for the Memorandum of Cooperation, a roundtable discussion was held with TOMODACHI alumni from Tohoku, representatives from the Government of Japan and the U.S. Embassy, and President Irene Hirano Inouye. The topic ranged from the progress made for rebuilding Tohoku, the activities and impact of TOMODACHI to date, and the roles of the young people from Tohoku and beyond who will become future leaders.

Since its establishment in 2012, there have been over 4,600 TOMODACHI program participants which have now become alumni, with over 2,600 from the Tohoku region.

The reception was attended by approximately 200 guests which included companies that contributed to and have partnered with TOMODACHI.

During the TOMODACHI Reception, United States Embassy Tokyo Charge d’Affairs Jason P. Hyland stated, “Thank you to Irene Hirano Inouye and the U.S.-Japan Council for being such a strong partner in this Initiative, and for all of the contributors who have done so much on behalf of the young people of our two countries through these programs.” 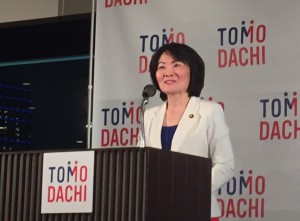 Miki Yamada, Parliamentary Vice-Minister for Foreign Affairs said, “In these times of globalization, it is the next generation leaders with global perspectives that will support Tohoku and the U.S.-Japan relationship. Under the “TOMODACHI Partnership”, the Government of Japan will proactively further its support for TOMODACHI.”* 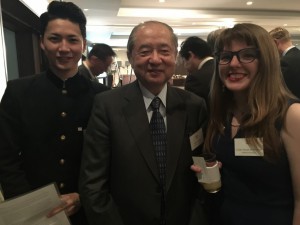 Furthermore, representing the TOMODACHI Fund for Exchanges, Yorihiko Kojima, Chairman of the Board for Mitsubishi Corporation said the following about continuing its relationship with TOMODACHI. “We are renewing our support for TOMODACHI so that the young people in the disaster-affected areas of Tohoku will have an opportunity to meet colleagues of the same generation from America. Through these people-to-people exchanges, we hope that the young people in Tohoku will obtain new ideas and skills that can help rebuild and revitalize Tohoku, energizing and uplifting their spirits.” He continued his speech with a message to the 25 alumni that were present at the reception, representing the TOMODACHI Generation. “Our desire is for the young people in Tohoku, such as yourselves, to become the core leaders for ‘revitalizing the area’ and rebuilding the disaster affected areas of Tohoku.”*

Irene Hirano Inouye, President of the U.S.-Japan Council, expressed her appreciation to all who have been involved with TOMODACHI. “None of this would have been possible without our many sponsors, supporters and partners. Thank you for the generous financial support, organizing events in partnership with us, and supporting the next generation of leaders. This significant public-private partnership would not have been possible without the vision and leadership of Ambassador John Roos and with the continuing support of Ambassador Caroline Kennedy and their staff who have been a partner every step along the way. We are especially honored to welcome Ambassador Masaharu Kohno as our new Senior Advisor for TOMODACH.”

Fumiya Otani, a TOMODACHI alumni from Iwate Prefecture in Tohoku, said the following, “This faith that we can overcome anything has been inspired by the TOMODACHI Initiative and its countless supporters. The Initiative emphasizes hard work, empathy and the importance of making a difference through volunteerism and selfless acts of kindness. TOMODACHI has shown us the amazing things we can accomplish if we work together.”

To conclude the evening program, Caitie McDermott, representing the TOMODACHI alumni from America, recited a poem she created regarding the strength and resilience of the people from Tohoku. Additionally, a slideshow was presented in which messages of encouragement and hope to Tohoku and messages from Tohoku that were submitted for a social media campaign that was launched by TOMODACHI.

This TOMODACHI reception became an opportunity to reflect upon the TOMODACHI Initiative which was born out of support for Japan’s recover from the Great East Japan Earthquake and to look back on the progress Tohoku has made. Furthermore, it was an opportunity to show appreciation to many of the donor companies, organizations and individuals, as well as alumni that TOMODACHI will continue to provide exchanges between the United States and Japan and to invest in the next generation of young people in Tohoku.

(*Note: This is not an official translation.)

Mar 08, 2016
ABOUT US
PROGRAMS & ACTIVITIES
NEWS & MEDIA
GET INVOLVED
CONTACT US