Young Japanese Leaders with Disabilities Participate in the TOMODACHI ADA25 Lead On! Program

From July 22 to August 5, 2015, twenty four young Japanese leaders with disabilities from all over Japan joined the ADA25 Celebration in Washington, D.C. organized by National Council on Independent Living (NCIL). July 26, 2015 marks the 25th anniversary of the Americans with Disabilities Act (ADA), which is the first anti-discrimination law against people with disabilities in the world. As emerging leaders from the United States and Japan to came together, participants had a great opportunity to share what they have learned in their countries and to further develop visions and strategies as International Human Rights Leaders. 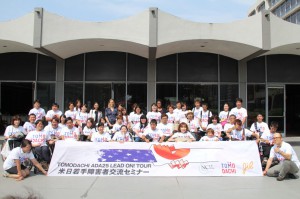 The participants split up into two groups — one group visited Berkeley, California and the other visited Chicago, Illinois — prior to and after the joint tour in Washington, D.C. During the ADA25 Celebration in Washington, D.C., the participants had the chance to meet Ms. Marca Bristo, the chairperson of Access Living from NCIL.  They also attended a reception at the Kennedy Center, where the participants interacted with many leaders in the disability field such as Mrs. Yoshiko Dart, whose husband Justin Dart, is known to be the “Father of ADA”. The International Youth Seminar on Independent Living at NCIL 2015 Annual Conference was an exciting experience for the participants because they were able to learn about implementing and monitoring of the ADA from both government agencies and disability organizations.

Many of the Japanese delegates were anxious prior to the program, but the anxiety dissipated as they were exposed to this stimulating environment, and their powerful experience motivated them to become leaders in their communities in Japan.

Toshiko Kudo from CIL Tachikawa commented on the impact a single individual can have, saying, “There is a big gap between people with disabilities and people without disabilities in Japan. People are polite, but do not go out of their way to speak with strangers, especially those with disabilities. However, here in the United States, people seemed genuinely interested in getting to know me. They complimented me on my hat, my bag, and even said my wheelchair was cool. Small talk like this made me feel welcome and less different.”

Ayaka Yamaguchi of CIL Iruka (Dolphin) noted the power of a group of people, saying, “I was very surprised by the number of people who showed up at the parade. There was an enormous turnout with so much passion and energy. It was unlike any of Japan’s parades, in which the same people show up every time like the ones that I go to in Okinawa. This felt like real dedication.”

Aug 27, 2015
ABOUT US
PROGRAMS & ACTIVITIES
NEWS & MEDIA
GET INVOLVED
CONTACT US