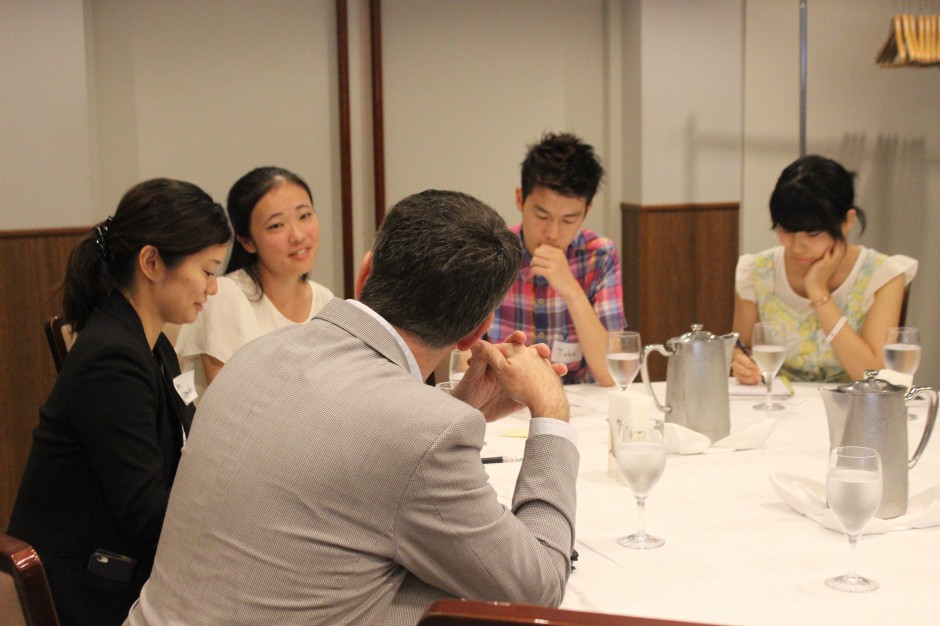 “Get self-absorbed, stretch yourself, and make your own luck….These are the three steps that will help you make a career pivot.” As Darren Menabney walked across the stage gesturing with his hands, the audience members nodded in agreement. Here was a man telling them that it was indeed okay to take risks; that there was nothing wrong with pursuing their passions in order to drive their career. Mr. Menabney’s statements stirred discussion as alumni were prompted to explore their passions, what fueled that passion, and their goals at the TOMODACHI Alumni Leadership Program event, “Effective Cross-Cultural Leadership” held on August 13, 2015. 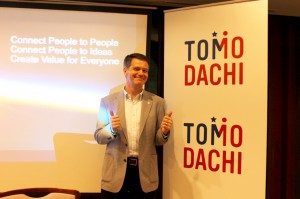 The distinctive evening commenced with a presentation by Mr. Menabney, who shared his dynamic past: one that began with twenty years in the Canadian government and led him to become the Global HR Manager at Ricoh Company Ltd in Tokyo today. By becoming “self-absorbed,” he realized that he enjoyed connecting people and ideas; by making a bold move to Japan to earn his MBA, he had stretched himself outside his comfort zone; by developing networks and demonstrating his passions, he had “made his own luck.” By following three simple steps, he had placed himself into what he called the “sunshine spot,” where people thrive and grow.

At the end of his presentation, Mr. Menabney encouraged the alumni attendees to pinpoint their own skills, passions, and characteristics that make them a “cross-cultural leader.” The alumni bounced ideas off of one another, building confidence in effective communication and listening skills. In addition, each alumni produced their own mission statements, ranging from the desire to create an open-minded society to empowering female engineers. The young audience members learned that passions and goals are versatile: as they encounter new experiences and ideas, views are bound to change. The constructive discussion was thought provoking and allowed participants to delve deeply to find their personal goals. 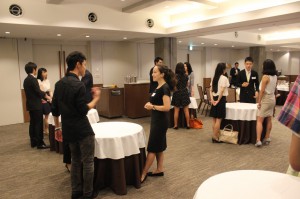 As the evening came to a close, Mr. Menabney provided the alumni with tips on developing and maintaining close networks. Asserting that communication skills are vital in one’s success as a leader, he encouraged participants to take risks and to learn from mistakes in order to rise to their “sunshine point.” The TOMODACHI Initiative would like to thank Mr. Darren Menabney for his stimulating and innovative speech.

Aug 28, 2015
ABOUT US
PROGRAMS & ACTIVITIES
NEWS & MEDIA
GET INVOLVED
CONTACT US