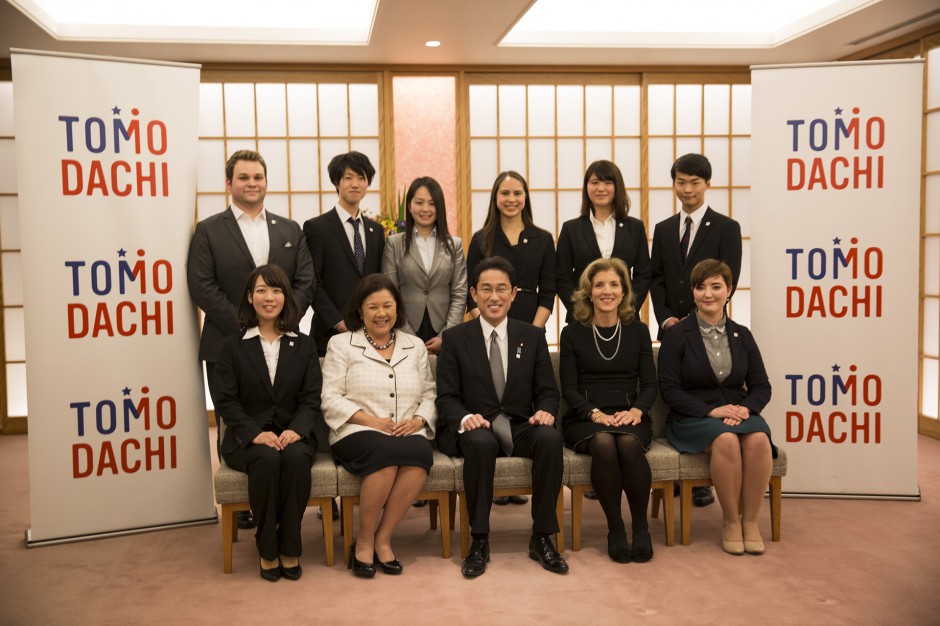 On March 10, 2015, Japanese Foreign Minister Fumio Kishida met with TOMODACHI Alumni, U.S. Ambassador to Japan Caroline Kennedy and U.S.-Japan Council President Irene Hirano Inouye. Foreign Minister Kishida welcomed everyone, and commented that it was the fourth anniversary of the Great East Japan Earthquake and Tsunami. He expressed his appreciation for the support that the United States provided in Operation Tomodachi, from the U.S. Government and the U.S. Embassy.  Ambassador Kennedy responded to his greeting, explaining that in the past four years the United States has been steadily working toward the recovery of the Tohoku region under the TOMODACHI Initiative.  USJC President Irene Hirano Inouye expressed that the TOMODACHI Initiative program participants have been taking steps to overcome their hardships by visiting the Unites States, exposing themselves to new cultures and learning leadership skills.

Representing the students from Tohoku, Natsumi Kinoshita emphasized the importance of opportunities that help nurture the young generation to have a global mindset. She then expressed her gratitude for being able to visit the United States on a TOMODACHI program. Following her speech, an American student, John Carlson, stated he will not forget about the Great East Japan Earthquake and Tsunami, and emphasized that the bond among the TOMODACHI Generation will be a long lasting asset to the U.S.-Japan bilateral relationship.

Foreign Minister Kishida mentioned about his visit to the “JFK-His Life and Legacy” exhibition with Ambassador Kennedy, and the importance of following the footsteps of the late President’s effort in strengthening ties between the two countries.  He expressed his high hopes for the TOMODACHI Generation taking on the role as next generation leaders, and stated that he was certain there will be a bright future ahead for the bilateral relationship, having heard the stories from the students. He also expressed his gratitude for the dedication that Ambassador Kennedy and U.S.-Japan Council President Irene Hirano Inouye have made in strengthening ties between the two countries.

Mar 14, 2015
ABOUT US
PROGRAMS & ACTIVITIES
NEWS & MEDIA
GET INVOLVED
CONTACT US