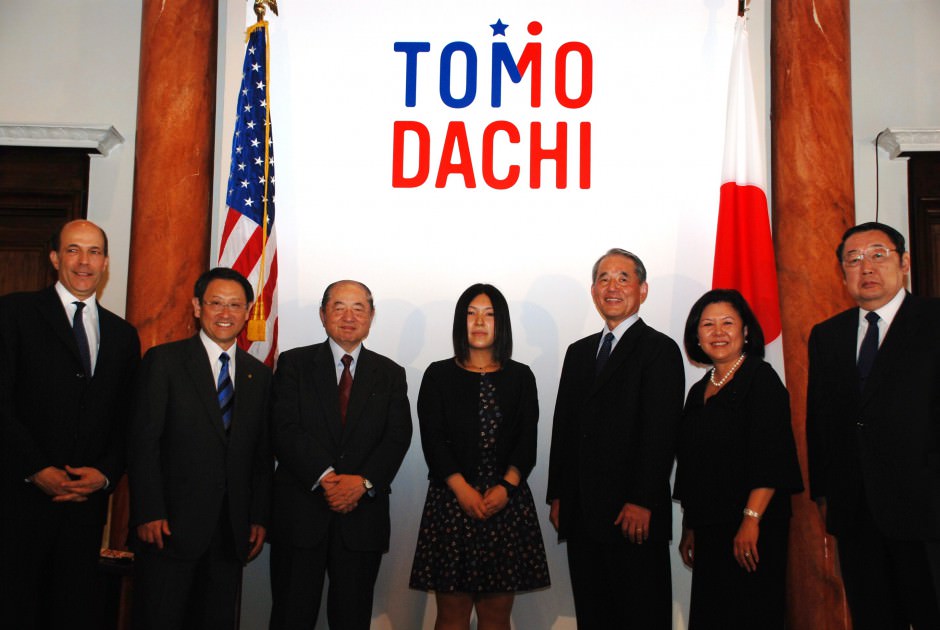 April 18, 2012 – Five leading Japanese companies today become the newest partners in the TOMODACHI Initiative, the bilateral public- private partnership launched in 2011 by the U.S. Embassy in Tokyo and the U.S.-Japan Council.

Toyota Motor Corporation, Mitsubishi Corporation, Hitachi, Ltd., Mitsubishi UFJ Financial Group, Inc., and Takeda Pharmaceutical Company Limited are the latest companies to contribute to TOMODACHI, which seeks to support Japan’s recovery from the Great East Japan Earthquake and invest in the next generation of leaders on both sides of the Pacific to strengthen the cultural and economic ties between the United States and Japan.

The contributions from these five top Japanese firms – amounting to over $4 million – will be used to create a new “TOMODACHI Fund for Exchanges,” as well as to strengthen TOMODACHI’s administrative capabilities. Under the new Fund, hundreds of young Japanese students will be given enhanced opportunities to participate in high-quality educational and cultural exchange programs with their American counterparts – helping to achieve TOMODACHI’s vision of giving hope to the young people of the Tohoku region and Japan as a whole, as well as providing the skills and opportunities they need to pursue their dreams. These corporate commitments are important because they will sustain these opportunities for years into the future.

“These generous contributions from some of Japan’s leading businesses demonstrate a significant commitment to investing in the young people of the Tohoku region and to strengthening overall U.S.-Japan relations,” Ambassador Roos said. “We hope the example set by these companies’ good corporate citizenship will encourage other forward-looking firms to support TOMODACHI.”

Apr 18, 2012
ABOUT US
PROGRAMS & ACTIVITIES
NEWS & MEDIA
GET INVOLVED
CONTACT US