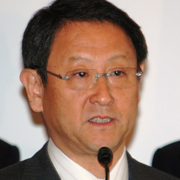 Excerpt of Remarks at Cloudforce Japan
Regarding the TOMODACHI Initiative
December 6, 2012

“First of all, I would like to thank the US Government and the people of the United States for supporting Japan before and after the earthquake.  As a Japanese national, I would like to take this opportunity to thank you for your efforts.  I believe that this year was a time when we felt the importance of people-to-people relationships, as well as between business and local communities, after the earthquake.

Specifically, the TOMODACHI project was an initiative that Ambassador Roos had personally called me about.  Ambassador Roos told me that he has an idea, and he would like Japan and other business to join us, I thought it was advice that had overcome country borders.

[ I] was invited to the US Embassy to listen to a woman [Ayaka Ogawa] speak.  I remember to this day about what she said — how we “gave her a dream”.  Something terrible had happened in her life but she was trying to move forward, pursuing a dream, and I was able to be a part of providing that dream to her.  This is something Japan and the US and business from both countries were able to work together to provide for her.  We are making a contribution to change, even more than toward the world economy… “