Young Leaders from the U.S. and Japan Gather for the Next Generation Summit 2021: “Ideas to Action: Breaking Barriers for a Sustainable Community with Enduring Value” 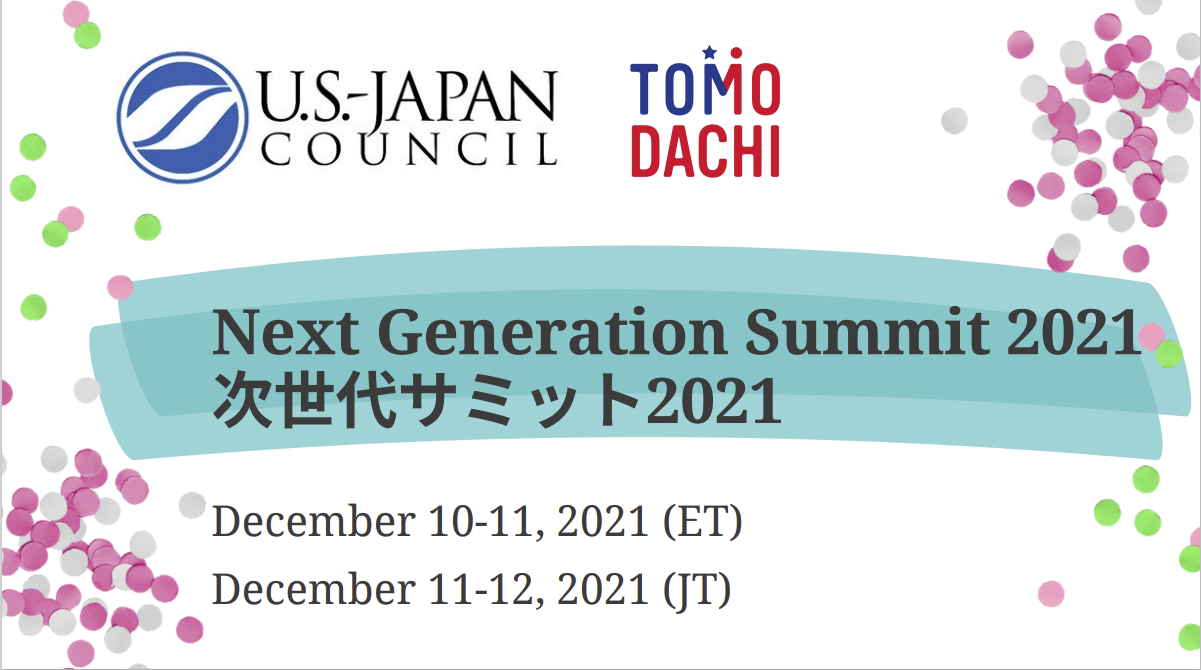 In December, the Next Generation Summit 2021 was held as the final installment of the U.S.-Japan Council’s 2021 Signature Series. The virtual stage, titled “Ideas to Action: Breaking Barriers for a Sustainable Community with Enduring Value,” provided opportunities for the younger voices of the USJC community including TOMODACHI alumni, U40 (under 40) members, and Watanabe scholars to share their perspectives on topics that they deemed significant to their generation.

Executive Director of the U.S.-Japan Council (Japan) Junko Tsuda opened the two-day event where she stated that ridding oneself of the timidity that comes along with change enables one to see change as an opportunity. Alumni also got the opportunity to understand how government leaders value the impact of TOMODACHI. Chargé d’Affaires ad interim of the U.S. Embassy in Tokyo Raymond F. Greene emphasized the importance of the U.S.-Japan relationship, drawing direct parallels between TOMODACHI’s mission and the activities of the U.S. Embassy in Tokyo.

“While government, military and business have critical roles to play, over the years, I have found that the most critical ingredient to sustaining the U.S.-Japan relationship are the bonds between our young people, which TOMODACHI, through programs like this one, are helping to forge every day,” he asserted. 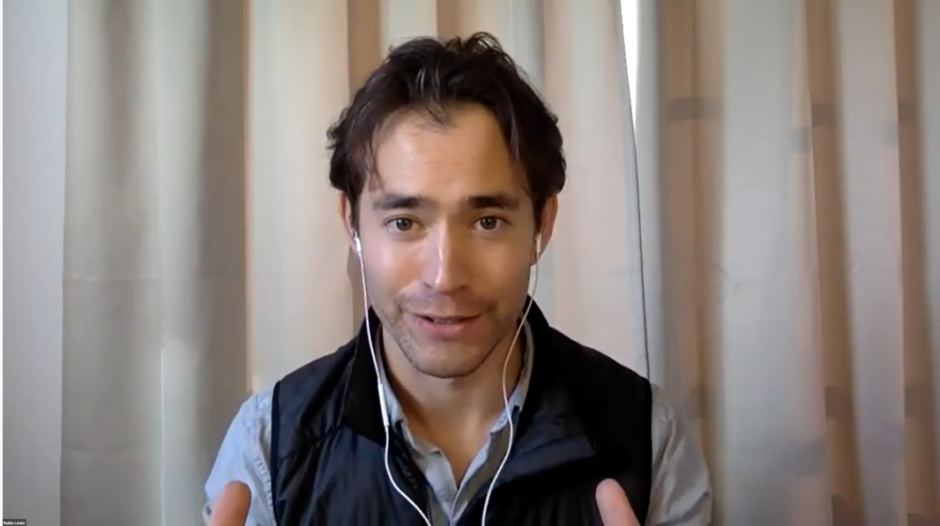 Keynote speaker Robin Takashi Lewis, alumnus of the TOMODACHI NGO Leadership Program supported by J.P. Morgan and Co-Founder of mymizu and Social Innovation Japan discussed the topic of breaking barriers by sharing his personal journey from high school graduate to social entrepreneur. He emphasized the impact of the conversations he engaged in had on his career and the importance of breaking through both external and internal barriers during our own respective journeys.

He stressed that in order to overcome those barriers and turn ideas into action, everyone has a role to play in that change, regardless of their position in society and how small or large the action is.

Mr. Lewis closed with the assertion that “We all have influence, every day, every time we buy something, every time we have a conversation, we have a huge influence on those around us…Let’s get out of the mindset that we’re future leaders, we’re current leaders.” 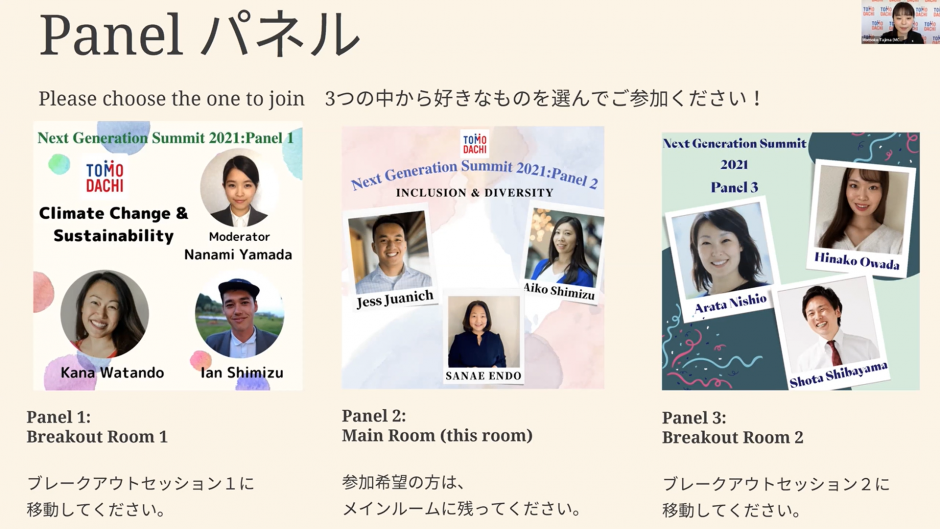 The audience of current leaders engaged in three panel discussions on topics ranging from climate change and sustainability to education reform and youth empowerment.

The Climate Change & Sustainability panel brought together young leaders in their twenties who started their own initiatives focused on educating youth on climate change and sustainable tourism through zero waste. Participants in the Inclusion & Diversity panel examined the importance young professionals place on corporate values and how diversity and inclusion initiatives are implemented. The Education Reform & Youth Empowerment panel gave participants the opportunity to discuss how to introduce a better education style to empower youth.

Day 1 of the Summit continued with the regional leaders laying the foundation for the second and final day of the event before closing with remarks from TOMODACHI Summer SoftBank Leadership Program alumna Hinako Murakami, who shared her personal experiences of the triple disaster on March 11, 2011, and how the TOMODACHI Initiative had a direct impact on her personal and professional growth.

Day 2 of the Summit opened with remarks from U.S.-Japan Council President & CEO Suzanne Basalla and Ambassador Kanji Ymanouchi, the Consul General of Japan in New York. Both offered words of support for the TOMODACHI Initiative, describing the impact of the people-to-people relationships that the program allows participants to establish and how those bonds have strengthened the U.S.-Japan relationship.

“I believe that TOMODACHI has a special place at the heart of USJC’s endeavors. This is a great program for the next generation, future leaders of both countries who strive for their dreams and build great bridges between the two countries,” said the Ambassador. “The TOMODACHI Initiative has been one of the most outstanding activities of friendship between our two countries.” 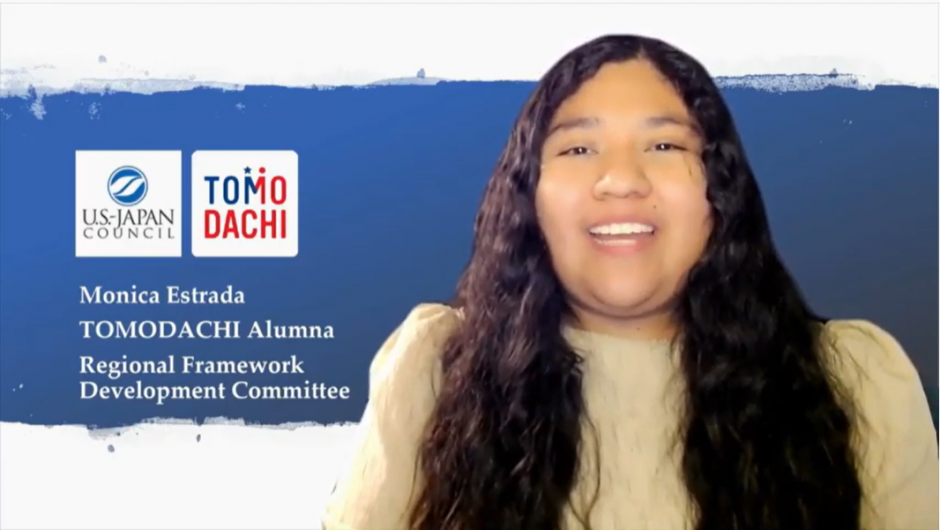 Day 2 also provided regional leaders with the opportunity to highlight regional issues across diverse regions in Japan. Following those discussions, TOMODACHI Daiwa House Student Leadership Conference alumna Monica Estrada and the 2022 U.S. Regional Representatives announced the development of the TOMODACHI Alumni Regional Framework, a new initiative put in place to grow the TOMODACHI community in regions across the United States and Japan.

The Next Generation Summit closed with remarks from 2018 TOMODACHI KAKEHASHI Inouye Scholars Program alumnus Tristan Norman, who described the direct impact his experiences with the TOMODACHI Initiative had on his career and future ambitions. He encouraged the audience to continue to find new ways to break down barriers and create lasting friendships. “These big beginnings,” he asserted, “begin with small steps.”

The U.S.-Japan Council would like to extend its sincere gratitude to Prudential for being the presenting sponsor for the Next Generation Summit and for their continued support to the TOMODACHI Alumni Leadership Program.

・Click here to watch the recordings of the event.
・Speech scripts of the closing remarks offered by two alumni speakers are available at the following links; Hinako Murakami and Tristan Norman.

Jan 27, 2022
ABOUT US
PROGRAMS & ACTIVITIES
NEWS & MEDIA
GET INVOLVED
CONTACT US