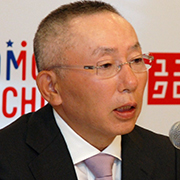 Excerpt of Remarks at  Press Conference on
TOMODACHI-UNIQLO Fellowship
October 22, 2012

“I have heard that recently, the number of Japanese students going abroad to study in the United States has declined compared to those who go to study in India,China, or Korea.  When you consider the historical relationship between Japan and the U.S., I believe that more Japanese students should actually be studying in the United States.  In the past,Japan has incorporated new things from other countries in order to grow.  Therefore, I would like more young people from Japan to go and study abroad.  By doing so, they will meet people from different countries and will share many things, which is very important.

Fashion and design, as well as business management, are all closely linked in our industry.  If young Japanese people can study at world-class institutions and can serve as a bridge between Japan and the U.S., especially in these fields of work, they will be able to succeed beyond country borders.  Especially since the fashion business has no frontiers.  Therefore, I would like the young people of Japan to be interested in studying abroad.”

On why UNIQLO is investing in sending Japanese students to the United States to study, rather than focusing on programs domestically:

“In our business, it is important that the study of textiles, fabrics and related fields in Japan is supported. More importantly, I believe that we must reverse Japan’s tendency to be inward looking.  For example, at UNIQLO we have expanded our business internationally, and at the same time many apparel businesses have launched in Japan.  If you want to succeed in this type of environment, it is necessary for you to be knowledgeable in the fashion business, and not solely in the area of textile sciences, in order to compete globally.  Studying about fashion at The Fashion Institution of Technology or at Parsons has many advantages.  In cities such as New York, there are top quality businesses and talent from all over the world.  Studying in places such as New York will make a difference in the careers of young people wishing to enter such an industry.

We are expanding our business worldwide, and we would like to recruit young talent who will help us to grow our company, while we support their development.  I believe that there needs to be a trend for young people in general to look beyond Japan when thinking of development and growth opportunities.

We have decided to join the TOMODACHI Initiative because of these beliefs.”