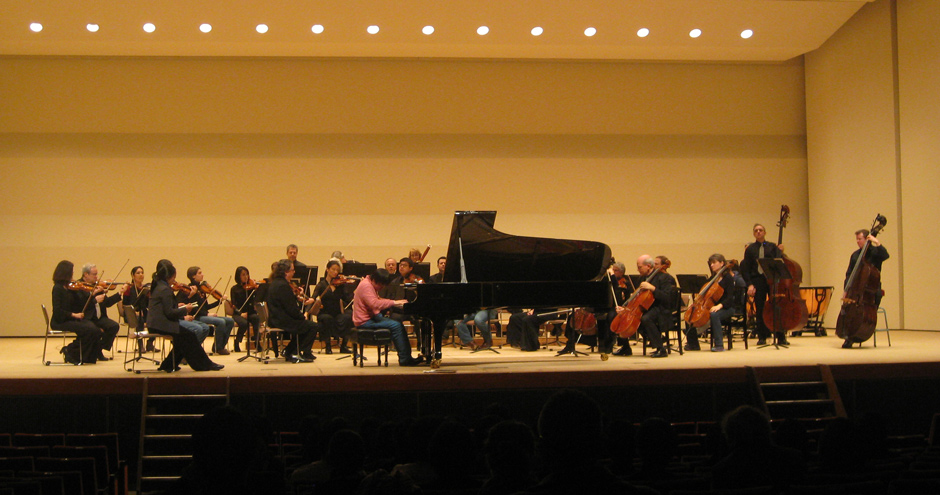 The Tokyo Electron Hall Miyagi in Sendai buzzed with energy as people packed into the Hall for the evening’s much-anticipated performance. As all 1,590 seats were filled, the lights slowly dimmed, and the crowds quieted. They had all gathered to experience the magic of the Orpheus Chamber Orchestra, a New York-based conductor-less orchestra that had begun its Japan Tour on February 1, 2014, accompanied by the piano prodigy Nobuyuki Tsujii.
As part of the TOMODACHI Orpheus Chamber Orchestra Education Engagement Program, earlier that evening on February 5, 35 students and five chaperones of Shukoh Middle School led by the director of the international center were granted special access to watch the dress rehearsal. These students are part of the orchestra club at their school and had a special appreciation for music, especially after the Great East Japan Earthquake and following tsunami leveled their school.  Some students watched the dress rehearsal in awe, others closed their eyes to experience the sound without sight, and others just grinned from ear to ear as they took it all in. 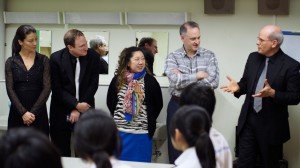 Afterwards, six musicians including Jonathan Spitz and Miho Saegusa from the Orpheus Orchestra did a Q&A session with the students in which they discussed the democratic way in which the musicians collaborate and listen together that make the Orpheus Method possible.
Having this additional knowledge, it created a special opportunity for the students to appreciate and enjoy the music to a greater extent. After the performance, the students and teachers commented that they were simply blown away at the brilliance of the musicians and their performance.
The music teacher who leads the orchestra club at Shukoh Middle School remarked that prior to the day of the performance, she noticed that the students had begun to lose motivation – not practicing enough or coming into class late – but she said that after the dress rehearsal, discussion and performance with the Orpheus Orchestra, she could see a noticeable difference in the way the students were talking about music and carrying themselves. There was a renewed energy among the students and she could feel the impact the Orpheus musicians and Nobuyuki Tsujii had on them. 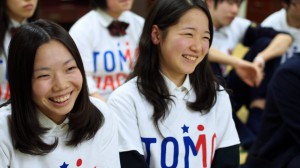 As a testament to that, one of the students, Misaki Otsuka, the First Trumpet in her orchestra club said that she was amazed at how the musicians were able to carry on for so long (sometimes longer than thirty minutes) and that it renewed her drive to try harder in her own orchestra club.
Representing the Fund for Exchanges donors, Makiko Tomizawa, Assistant Manager of the Government & External Relations Division from Hitachi, Ltd. traveled from Tokyo to watch the program and performance. She commented after the show that she was glad to be able to see the impact the Fund for Exchanges is having first hand by having the chance to meet these students and be a part of this experience.
In May 2012, the Orpheus Chamber Orchestra had conducted a music workshop for 100 students at Shukoh Middle School in Tagajo City, Miyagi Prefecture. The Orpheus musicians, who were on their 11th tour of Japan, had practiced a piece by Sibelius with music students, performed a Rossini overture, and discussed their musical careers and experiences with students and faculty. 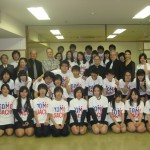 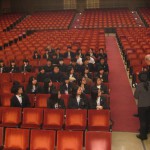 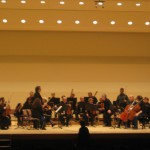 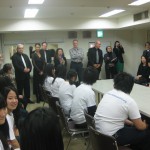 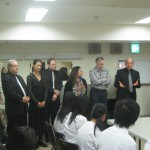 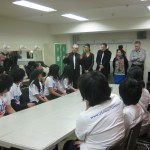 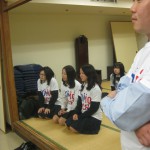 Feb 05, 2014
ABOUT US
PROGRAMS & ACTIVITIES
NEWS & MEDIA
GET INVOLVED
CONTACT US