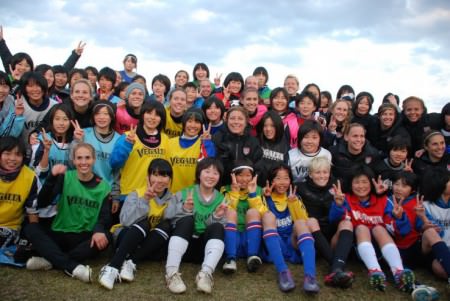 March 26, 2012 – As part of the “Empowering Women and Girls Through Sports Initiative,” the U.S. Department of State’s Bureau of Educational and Cultural Affairs and U.S. Soccer announced that the U.S. Women’s National Soccer Team will take to the soccer field and lead a event for Japanese youth in Sendai, Japan on Tuesday, March 27, 2012.

Members of the U.S. Women’s National Team will emphasize how young women can accomplish their goals through dedication and hard work. Through the Empowering Women and Girls Through Sports Initiative, the Department is mobilizing all of its international sports programming to increase the number of women and girls worldwide who are involved in sports.

The clinic is slated to begin at 5 p.m. (local time) at the Izumi Soccer Field in Sendai, Japan, in the Tohoku region, which was devastated by last year’s earthquake and tsunami. Media interested in covering the clinic with the U.S. Women’s National Team in Sendai should contact Christopher Quade at U.S. Embassy Tokyo.

In addition, the U.S. Women’s National Team’s clinic underscores the United States’ strong commitment to Japan, the young people of the Tohoku region, and the TOMODACHI initiative. TOMODACHI is a public-private partnership led by the U.S. Government, the Japanese Government and the U.S.-Japan Council, and supported by corporations, nonprofit organizations, and individuals. This event also builds on Hall-of-Famer and Public Diplomacy Envoy Cal Ripken, Jr.’s trip to Japan in November 2011, when he met with scores of Japanese youth in the Tohoku region.

Sports diplomacy builds on Secretary Clinton’s vision of “smart power.” It embraces the full range of diplomatic tools, including soccer, to bring people together for greater understanding.

Through the Bureau of Educational and Cultural Affairs’ SportsUnited Division, the U.S. Department of State conducts sports exchange programs to engage youth worldwide. Sports Visitors are young athletes and coaches who travel to the United States for an exchange. Since 2003, SportsUnited has brought more than 900 athletes from 58 countries to the U.S. to participate in Sport Visitor programs. Since 2005, SportsUnited has sent over 200 U.S. athletes to 50 countries to participate in Sport Envoy programs.

Mar 26, 2012
ABOUT US
PROGRAMS & ACTIVITIES
NEWS & MEDIA
GET INVOLVED
CONTACT US