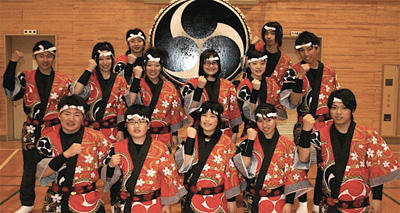 The Yamakiya Taiko Group of Fukushima, Japan went to the United States during the spring of 2012, where they did a series of performances in Washington, DC and Baltimore from April 9-16, 2012 as part of the annual Cherry Blossom Festival celebration. The students, ages 12-20, had been evacuated from their homes due to radiation contamination from the Fukishima Daiichi Nuclear Plant following the March 11, 2011 earthquake and tsunami.

Among the venues where the Yamakiya Taiko Group performed were Morgan State University, the National Cherry Blossom Festival Parade, the Sakura Matsuri Street Festival, a cherry blossom planting ceremony at in Frederick, Maryland, and the Kennedy Center’s Millennium Stage.

The group’s program was sponsored under TOMODACHI by the Japan-America Society of Washington, D.C., working with U.S. alumni of the Japan Exchange and Teaching Program (JET). American Airlines provided very generous support to help fly the Yamakiya Taiko Group and their drums to the United States.