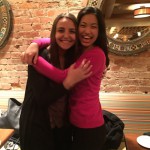 Wakana Inoue was born and raised in the United States, and currently studies Law at Keio University in Tokyo. She participated in the 2016 Building the TOMODACHI Generation Program.

Q: Why did you decide to participate in the Building a TOMODACHI Generation Program?

A: Born and raised in the United States, I always struggled with my identity; I felt attached to my Japanese nationality but was also immersed in American culture. I saw myself having to switch back and forth from the two separate identities, but after spending several years in Japan, the two started to merge. As the strong alliance between Japan and the United States became evident, I wanted to use my background and become the bridge between Japan and the United States. At the same time, by learning effective leadership skills, I wanted to change the existing male-dominant workforce and stand my ground as a female entrepreneur.

The ultimate goal of this program is to plan Great East Japan Earthquake relief projects. I thought this was a perfect opportunity for me to take action and make a difference for those affected. I was unable to participate in hands-on relief efforts at the time of the Earthquake, so I wanted to be more actively involved.

In these hopes to gain cross-cultural experiences and deepen understanding with students from the United States, I chose to participate in the Building the TOMODACHI Generation Program.

Q: What kinds of experiences did you gain through the program?

Additionally, this program taught me how difficult it is to understand and be flexible with cultural differences. Since I joined this program to culturally bridge the United States and Japan, spreading cultural understanding was a challenging but also exciting process. Every day was breaking a cultural barrier, and increasing cultural appreciation. As I exposed Japanese culture to the students in the United States, I became prouder to call Japan my home.

Q: What are your plans for the future? How has this program influenced those plans?

A: As an aspiring social entrepreneur, I plan to use what I have learned throughout this program and start a non-profit organization focused on helping children receive an education and supporting working women. In addition, cherishing every memory and person I have met on this experience, I would like to organize TOMODACHI alumni events and encourage participation in TOMODACHI programs.

Spending years in the United States, I realized that Japanese people tend to feel inferior to people from Western countries. However, that is simply not the case. Through endless discussions with program participants, I was reinforced that each country has its own strength, and I would like to keep spreading those strengths in the future.

A message from Ms. Inoue:

Finally I will like to thank all the sponsors who have supported this program, the TOMODACHI Fund for Exchanges in addition to Morgan Stanley, as well as every person involved in this program. Their passion and commitment is beyond words, and I cannot express my gratitude towards them. In addition, I want to thank all of the participants of the 2016 Building the TOMODACHI Generation Program. The discussions and late night talks we had were inspirational and I gained something new everyday. I learned so much from everyone and am thankful that I had the chance to meet such passionate, humble people. Each memory with all of you is precious and I hope that each of us will strive for a better future as TOMODACHI alumni.