TOMODACHI FamilyMart SDGs Leadership Program in Tohoku -Beyond Tohoku to Japan, and Finally, the World- Kicked Off to Solve Regional Challenges in Tohoku

On August 12 and 13, 2021, Supporting Tohoku Academy, the first program for the TOMODACHI FamilyMart SDGs Leadership Program in Tohoku -Beyond Tohoku to Japan, and Finally, the World- was conducted virtually. 87 people attended.

This program encourages young people in Tohoku to engage in social action to solve regional challenges, build communities that support each other across generations, and practice community-based activities. 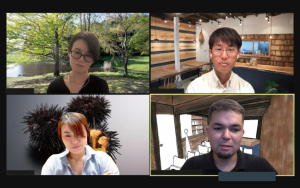 The first day of the 2-day event featured a panel discussion with three guests who are active in Tohoku in their respective fields, including video production, fishery and human resources development, and design. The panelists shared the reasons why they are working on their projects in Tohoku and the difficulties they have faced during their projects with the audience, which consisted of young people aspiring to solve regional issues in Tohoku through social action. The event’s primary goal was to provide resources and input for the participants.

On the following day, participants were divided into teams of four to five to discuss the lessons they learned from the previous day and their own social actions. Although the participants met each other for the first time, they actively communicated with each other and sympathized with the stories of others.

After the 2-day event, one of the participants said: “I realized that it is important to take action, that just thinking about something is not enough. I was motivated to start doing something even if it is something small.”

The next stage of the program is a 4-month course known as Action Course for young people who work on social issues in Iwate, Miyagi, and Fukushima Prefectures. The Tohoku Special Live Broadcast to Support Each Other, which will be held on December 9, will conclude the 4-month course with the presentations from the program participants on their projects.