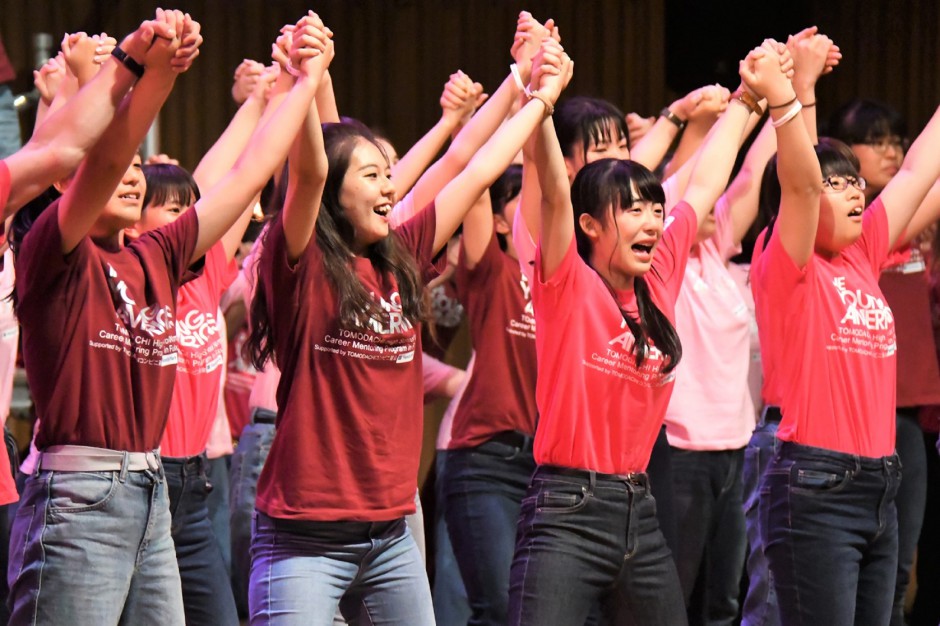 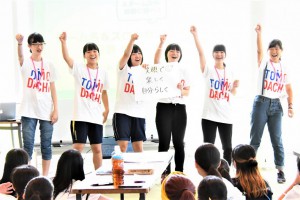 High school sophomore women from throughout Fukushima Prefecture were selected to participate in this career mentoring program, which consists of four sessions or “STEPS.” Over the course of the program, the students interact with and learn from female mentors with various backgrounds, nationalities, and careers. The goal of the program is to support the students so they can broaden their perspectives and gain the confidence to open doors and discover new opportunities for their futures.

During the program, participants are divided into groups of six to seven students. Twenty TOMODACHI alumni, who are university/technical school students, are also selected from Fukushima Prefecture to closely support each of the groups as mentors. In addition, four college students from Fukushima plan and organize the program as Project Assistants (PA). 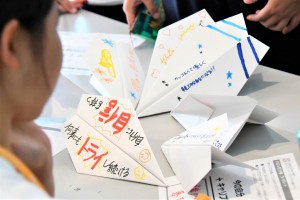 The first day of STEP 1 consisted of an opening session, followed by a team-building exercise in which the participants played games to break the ice, overcome their nerves, and get acquainted with one another. On the morning of the second day, the participants created team slogans, which they presented with their teams in front of all of the participants. On pieces of paper, they wrote about “how they envision themselves now and how they want to grow during the next six months of the program,” then folded the papers into airplanes, and threw them into the clear sky at Yoyogi Park in Tokyo.

Finally, in the afternoon, the Young Americans (YA), an American non-profit organization dedicated to music education, launched their workshop. Over two days, the students learned 20 dances and memorized a one-hour dance routine to perform on the third day. With support from the mentors, PAs, and Young Americans cast members, the participants learned English songs and dances. The participants encouraged one another, even occasionally practicing during breaks, saying that they will give the best performance possible.

On the last day, participants performed with all their strength for the over 500 guests who gathered for the show. Encouraged by roaring applause, each one of the students contributed to a moving and dynamic show. In the four days that composed STEP 1 of the program, the participants learned the importance and satisfaction of creating something with a group, opening themselves up to new challenges, and trusting teammates.

One of the participants reflected on the STEP1, saying, “Until now, I felt embarrassed to give my all to something. Though, to tell the truth, I wanted to devote myself fully to something without fear. Instead of considering these deeper feelings, I cared too much about what other people thought, and was affected by others’ opinions. From now on, I will genuinely take on any challenge and give it my all with the confidence that I will grow and change for the better, thanks to my experience in STEP1.”

The next session will take place from October 26 to 27, 2019, under the theme “STEP 2: A Session with Foreign Exchange Students Studying in Japan.” Participants will meet with foreign exchange students to discuss the reasons these students of different nationalities chose to study in Japan, their future dreams, and their struggles. Through these discussions, the participants will determine the challenges they want to overcome, develop goals, and outline how to achieve them.