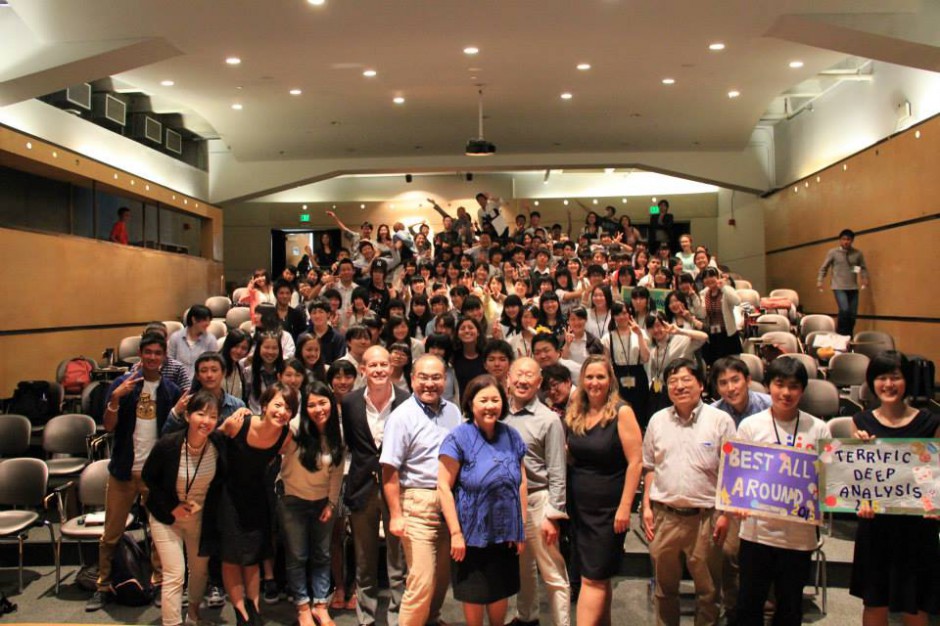 This year marks the fourth year of the TOMODACHI Summer 2015 SoftBank Leadership Program. The 100 Tohoku high school students that participated in the program from July 21 to August 12, 2015, returned to Japan after completing the program. Due to the generous support provided by the SoftBank Group Corp. (Softbank), high school students from the disaster affected areas of Iwate, Miyagi and Fukushima prefectures were selected to visit the University of California, Berkeley in California for an intensive three-week course that focused on global leadership development and community service.

The students participated in a workshop called the Y-PLAN (“Youth-Plan, Learn, Act, Now!”) in which they were asked to identify and create solutions for problem areas in the region.  Through this problem solving workshop, the students gained leadership skills while learning how to positively impact regional communities.

The students used this workshop as a foundation for thinking about prevalent problems in Tohoku, and established action plans that would revitalize their home communities and improve the recovery efforts in the region.

The students spent the first two weeks of the program learning the Y-PLAN methodology, and also visited the western part of Oakland, where they met local officials and NPOs to learn about the unique characteristics of the region as well as some of the challenges that the region is facing. The students then presented action plans for overcoming those challenges while also revitalizing the region.

In the third week, the students used what they had learned throughout the program to construct an action plan directed towards their home communities in Tohoku. They started off by identifying some of the existing problems in the region, and then reflected on why those problems existed and how they can be solved to ultimately uplift and revitalize their local communities. The students were joined by 6 staff from NPOs operating in the Tohoku prefectures of Iwate, Miyagi and Fukushima, who supported the students by providing advice and enriching the discussions. Due to the staff’s help, the students were able to successfully present their action plans.

A total of 66 group and individual action plans were presented. All of the plans were created based on the students’ 3.11 disaster experiences. Some of the solutions capitalized on students’ talents in their area of specialty, while others dealt with problems that are not only prevalent in Tohoku but also throughout Japan, such as the issues of aging population and low birth fertility rate. The presentations delivered by the students were all remarkably unique and insightful. SoftBank Group Corp.’s Corporate Officer and the General Manager of the Human Resources Department, Fumihiro Aono, and the president of the U.S.-Japan Council, Irene Hirano Inouye determined awards based on 6 different themes. The following are the action plans that received a special award for their superior work.

Below are six action plans from the 2015 TOMODACHI Softbank Leadership Program presentations:

An action plan that addresses the lack of community interaction after the 3.11 disasters by holding workshops geared towards introducing Miyagi’s unique local culture to children.

An action plan that is focused on utilizing the closing of a local middle school as an opportunity to create a facility where the local elderly and children can get together to teach and learn Iwate’s local cuisines, traditional arts, and cultures.

Focused on “heart-to-heart” communication, this action plan seeks to establish a peer counseling system where people who have gone through similar problems and traumatic events can come together to discuss their feelings of regret and remorse and to give advice to each other.

After experiencing refuge life and vowing that “no one should have to go through the same thing,” this person’s action plan focused on the pressing concern of an impending Nankai (southern sea) trough earthquake in their evacuation area of the Kinki region.  This plan aims to create a platform where people share their Tohoku experiences and prepare for any future earthquakes.

This action plan focuses on the growing number of solitary elderly deaths that have been occurring in the temporary housing shelters of Otsuchi city, a city which was completely destroyed by the Earthquake.  The plan urges people who have lost family members in the earthquake and have experienced loneliness to take in these solitary deaths as their own problem.  It aims to eliminate the number of solitary deaths by creating a personal shopping service, increasing interactions with the elderly, and reaching out for cooperation from the local government.

Since the 3.11 disasters, the safety of Iwaki’s local community has been threatened by a rise in crime rate. This action plan seeks to create a more safe and stable environment by developing a smart phone application that allows people to freely report information related to suspicious individuals and to map out dangerous areas.

Aug 25, 2015
ABOUT US
PROGRAMS & ACTIVITIES
NEWS & MEDIA
GET INVOLVED
CONTACT US