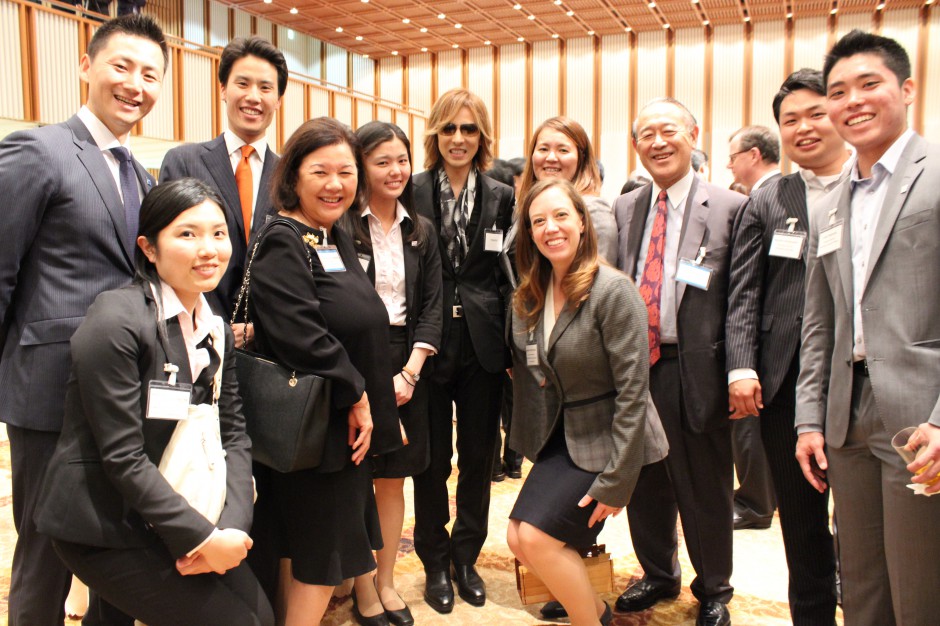 On May 8, 2015, TOMODACHI alumni had the opportunity to attend the opening reception for Pacific Vision 21.  The eight alumni spoke with dignitaries including former prime minister of Japan, Yasuo Fukuda; former Japanese Ambassador to the U.S., Ichiro Fujisaki; Hideo Nomo who was the second Japanese native to pitch in the American major leagues; and Yasushi Akashi who served as United Nations Under-Secretary-General.  U.S.-Japan Council President Irene Hirano Inouye was among the delegates selected to participate in the Pacific Vision 21 meetings, and enjoyed greeting the alumni at the kick-off event.

The first Pacific Vision 21 meeting was held on December 4, 2014 to strengthen ties between the United States and Japan by establishing a panel of distinguished Japanese and American leaders committed to outlining a blueprint for the bilateral relationship for the years ahead. The initiative is co-chaired by former Prime Minister of Japan Yasuo Fukuda, Chairman and CEO of Canon Fujio Mitarai, former Speaker of the U.S. House of Representatives Dennis Hastert, and former U.S. Senate Majority Leader Thomas Daschle.

Around 200 distinguished guests attended the opening reception from both public and private sectors. During the opening remark, Representative Dennis Hastert emphasized the importance of young people showing strong leadership, and particularly the role of the delegations pass on to young people what previous generations have done for the past 70 years in order to foster the next 30 coming years.

Chad Nakaoka, a recipient of TOMODACHI-Bridging Scholarship and a senior at the University of Hawaii at Manoa who is currently studying abroad at Tohoku University, attended the opening reception.  He is majoring in mechanical engineering and among the numerous conversations he had, he found a conversation with Professor Richard Lester most insightful and interesting. Since the Professor’s area of studying was nuclear science and engineering, Chad was able to receive a researcher’s point of view on the Fukushima nuclear power plant disaster. In turn, he shared his research he is conducting at Tohoku University.   “After I graduate with my bachelor’s degree, I aspire to return to Japan and study biomedical engineering,” he stated.  He is also inspired to act as a bridge between Japan and the U.S. as a second generation Japanese-American.

Alumni participation in high level delegations such as Pacific Vision 21 is part of the TOMODACHI Alumni Leadership Program, sponsored by the Prudential Foundation.  High level alumni engagement provides extraordinary and unique opportunities for TOMODACHI program alumni to express themselves eloquently in a formal business setting.  Not only can alumni expand their network among TOMODACHI Generation composed of all alumni from over 50 programs, they are also given opportunities to meet, speak and connect with distinguished figures who shape U.S. and Japan relations.

May 26, 2015
ABOUT US
PROGRAMS & ACTIVITIES
NEWS & MEDIA
GET INVOLVED
CONTACT US